Figures in newly released study by Robert Half show that salaries in the UAE are set to rise this year, with financial services expected to see strongest gains at 5.6% higher than all the other fields researched. Joyce Njeri tries to add it all up in this thought-provoking interview with James Sayer, the Middle East Director of the global staffing firm… 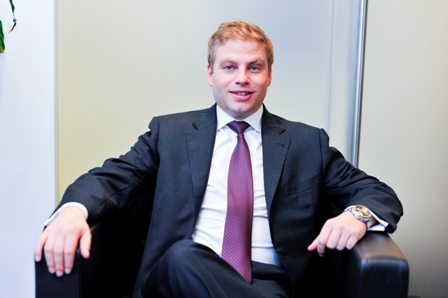 CAREER GUIDE: “Having a financial background or at minimum, a good grasp of the role finance plays within an organisation will always hold an individual in good stead.”

Q. After two tumultuous years that were characterised by economic and political instability in most countries in the Middle East and North Africa (Mena) region, observers say that relative calm and stability has returned, with some nations experiencing economic growth and a return of investor confidence. However, the revolutions put hiring in the spotlight, and now governments are accelerating companies push to hire local people to fill positions that initially used to go to executives from overseas. While your new ‘Salary Guide’ study alludes to the fact that companies are increasing remuneration in an effort to attract and recruit top talent, are you confident that local hires meet the skills set required?

A. While some governments in the region have recently intensified efforts in attempts to hire local talent, there are still some specialism and roles where companies are looking specifically for the skills and experience that expatriate talent brings.

Much of the more experienced roles, particularly within finance and accounting, are looking for individuals educated and experienced in more mature markets. This is particularly true for the financial services industry where the tide of global regulatory change has resulted in the need for firms to hire regulatory specialists that have worked in some of the major global financial centres.

Your new study suggests that finance leaders are now looking for business-savvy individuals with strong commercial acumen. As companies jostle for the region’s highly skilled workers – those equipped with both the technical and the soft skills needed to compete on international markets – how much demand do you foresee for qualified finance professionals in five years time? For instance, what other particular skills will be most in demand?

Even during the downturn, finance professionals remained in demand and this is anticipated to continue throughout 2013 and beyond. During the downturn accounting professionals were required to do much more than simply crunch the numbers. They occupied a seat at the decision-making table, helping companies define and execute strategy while improving efficiencies and sourcing growth opportunities.

Having strong commercial acumen in addition to technical skills is now a requisite for finance professionals. We have also seen the emergence of the financial business partner, where finance professionals are charged with working with various departments, such as HR, sales and operations, to use financial information and reporting to improve cross-departmental efficiencies.

Effective communication skills and the ability to communicate financial information to non-finance audiences will be a skill set that will be highly in demand in the coming years.

Speaking about the finance profession, a newly released report by the Association of Chartered Certified Accountants (ACCA) shows that having a finance qualification facilitates the path to the top of corporations for women. This came a week after His Highness Sheikh Mohammed bin Rashid Al Maktoum announced that his government has made a decision to make the representation of women in companies’ boards compulsory. In your opinion, does having a financial background or qualification affect the likelihood that women will obtain a board directorship?

While I’m not familiar with this report specifically, having a financial background or at minimum, a good grasp of the role finance plays within an organisation will always hold an individual – male or female – in good stead, whether it is for senior leadership roles or board directorships.

A report compiled by our Robert Half UK colleagues found that of the UK FTSE 100 CEOs, 52% have a financial background, up 67% from before the recession. While I don’t have the same information for the UAE, what the UK report suggests is that during a period of economic uncertainty, individuals with a strong financial background will see greater leadership opportunities than their non-financial counterparts.

I have noticed that many companies here in the UAE ask for salary requirements up front, before even the potential candidate talks to a hiring manager. Many people struggle when trying to obtain a salary they deserve and one that accommodates their lifestyle and often they worry about appearing unreasonable. What approach should the job seeker take in order to qualify and not get screened out of the interview due to his bid?

Salary negotiation is always a tricky subject as coming in too high may put off the employer but if you quote a figure that’s too low, you may be missing out on what you are worth. It is important to do your homework before stepping into salary negotiations, by speaking with others within your industry or consulting resources such as the Robert Half Salary Guide.

Working with a recruiter is also a good way to ensure you receive competitive compensation as they are aware of market rates and can negotiate on your behalf to get you the best offer.

Above all, a job seeker needs to be honest with themselves about what salary they would be happy with. An employer will typically go for the lower figure, so don’t quote a number that you would not be truly happy in accepting.

While you may get the job by lowballing, if you are not satisfied with the remuneration once you’re in the role, you’re setting yourself up for disappointment.

Generally, during salary negotiations, the principle is for the new hire to come in high and work his way down to a number that’s reasonable. If he comes in low and tries to work his way up, he doesn’t get as far. So what does one do when he lowballs himself during salary negotiations? At the same time, how does one best revisit salary talks after accepting a lowball offer?

Should you find yourself in a role where you feel you are underpaid, it is important that you first prove your value to the company and exceed expectations before revisiting salary discussions.

Doing so too early in your employment may give the impression that you are not a teamplayer. Ask to speak to your manager about remuneration and come prepared with examples of how you saved your company money, improved efficiencies or sourced a new revenue stream. Come prepared with two salary figures – one that you hope to achieve and one that you would be satisfied with.

Also consider non-financial benefits such as additional holiday or flexible working which may be easier too, for your manager to grant than a financial increase. If you are unsuccessful in negotiating a raise, discuss with your manager when an increase may be feasible and what benchmarks you need to accomplish to be eligible for additional remuneration.

In your latest ‘Salary Guide’ report, you mention that following the global financial downturn, companies were forced to review processes with the aim of improving efficiencies, finding cost savings and making strategic decisions to facilitate growth. Do you think the emergence of these new regulations has eschewed other growth initiatives in many companies, in favour of cost cutting and profit optimisation?

The downturn forced companies to look at how they conduct business and make more calculated and strategic choices when pursuing growth initiatives. A couple of years on and many companies continue this conservative approach, ensuring return on investment prior to embarking on new initiatives.

In another recent Robert Half survey, the study alluded to the fact that many Dubai professionals are working longer hours than contracted. Should working overtime on a regular basis be considered as part of employee’s salary?

Dubai professionals are working long hours and while some may get additional time off in lieu, the majority perform this work as part of their general responsibilities and should not expect additional remuneration.

Candidates should find out about expectations for overtime work during the interview process and weigh that against other factors of the job before accepting a job offer.