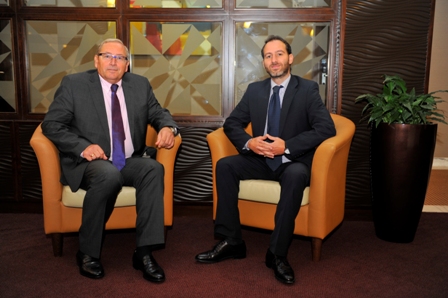 ACCOUNTING GIANT HLB International is currently rethinking its strategy in the Middle East and other emerging markets, in what promises to be an efficacious move.

As part of this drive into Middle East and Africa markets, HLB is seeking new members in a bid to expand its network, a move that will certainly help the organisation tap the region’s current windfall, particularly in oil and gas, telecoms and financial services.

Leading this drive are the network’s Chairman Mogens Andersen, and Marco Donzelli,
Head of Strategic Network Development, who were recently in Dubai for a three-day tour to meet with the network’s member firms in the region.

In addition to addressing the latest developments of the network, the meeting provided an opportunity for the member firms to explore new business leads in the region, post the infamous ‘Arab Spring’, and for the network to develop its already strong transnational relations.

“Part of our network’s success is due to the close collaboration and mutual knowledge between neighbouring countries. We see a lot of potential in this region,” Andersen said in an exclusive interview with Accountant Middle East.

As chairman of HLB International, Andersen’s primary role is to ensure that the network’s board is effective in its tasks of setting and implementing the organisation’s direction and strategy. The Danish national also acts as HLB’s leading representative which involves the presentation of the network’s aims and policies to the outside world.

Speaking about his role as Chairman of HLB International, Andersen said; “there are vast challenges in running a global network, but the nature of the task is changing with the accelerating shift of economic activity from Western economies to emerging markets particularly here in the Middle East, Africa, Asia and Latin America.”

“This is where we are directing our growth strategies,” he said.

According to McKinsey Global Institute research, 400 midsize emerging-market cities will generate nearly 40 per cent of global growth over the next 15 years.

“On a positive note, managing business across borders has been made possible due to continuing advances in technology, as communication with international partners has been made easy without the need for travel,” he added.

Formed in 1969, the HLB International network has 16,000 staff based in 500 offices in more than 110 countries. The network is the 14th-largest accounting network in the world. Here in the UAE, the network is represented by HLB Hamt, based in Dubai, and HLB Jivanjee based in Abu Dhabi.

Speaking of the Arab Spring, there’s no doubt that the business landscape has been affected, particularly since the restiveness came immediately after the global financial crisis. Andersen admits the political strife in some countries in the region affected HLB operations as well.

“Naturally the accounting profession suffered from the weakening economic environment, however not with the same intensity as other businesses since the network’s other operations such as mergers and acquisitions, reorganisation, corporate restructuring and insolvency were more active when economies were changing,” the chairman said.

“The slackening economy has caused many companies to cut back, and this in turn, has forced consulting firms to shift resources to different kinds of projects, to look overseas for new business and to scale back their recruiting efforts. However on a positive note, when companies are going through tough times, they’ll hire consultants to help them cut costs. So the issue here is to know how and where to redirect consulting efforts,” he added.

One of HLB’s business strategy is to forge and encourage sub-regional collaboration, that is, more collaboration between neighbouring countries, as they very often have a lot of interests and business – and quite often language as well – in common.

“The main goal is to find opportunities for value creation in tapping the differences at the borders of the various markets. As a result, we increasingly see value chains spanning multiple regional countries,” he added.

HLB’s rapid-growth strategy in new markets has necessitated the staffing of a highly effective international management team that is well versed with different local cultures and has a good understanding of global markets.

“That’s the reason we hired Marco Donzelli as the network’s Head of Strategic Network Development division to integrate our talent management and global mobility strategies,” quips Andersen, adding, “We have seen tremendous growth in the region and at HLB we have aligned ourselves to this growth. For instance we appointed Marco to help us find new firms that we could partner up with and help us spread our tentacles to other markets and grow the network.”

HLB is venturing into markets where “we feel we can improve coverage,” Donzelli says.

“While at it, we are focusing so much at quality, right size, and we have key performance indicators (KPIs) that help us measure the suitability of potential partners. For the moment, we reckon the Middle East and Africa as regions that promise very good potential and we have succeeded in finding some good firms to recruit. Also of course relating to business, we are aligning ourselves with firms that are, for instance, active in the oil and gas sector,” Donzelli adds.

Focus in HLB has mainly been strengthening the network. The executives say they try to recruit firms who rank top 10 nationally or locally and are able to keep the pace of a growing economy.

And where does HLB rank among other mid-tier networks?

According to the ranking of the International Accounting Bulletin, in 2013, HLB was number 14, having slid a few points down due to the loss of US firms.

“We are however working to improve both our ranking and annual returns. At the moment our global turnover is 1.7 billion but we are aiming to close 2014 at over 2 billion,” Donzelli said.

“We also have objectives for each of these regions in the world, we have identified 15 regions, five of them are in the Middle East and Africa region, specifically Mena, West Africa, East Africa, Central Africa and Southern Africa. We have a clear focus on generating and tracking referred business which allows us to constantly create and maintain engagement from member firms. We have a flexible growth strategy, as long as our firms focus on international business and quality of service,” Donzelli added.

Governments have been putting measures in place in an effort to minimise audit mistakes and fraudulent deals, particularly following the financial crisis. Andersen admits that for a major audit network like HLB which markets itself as a seamless global organisation, some of these legislations are challenging auditors.

“No doubt that operating globally generates a wide variety of legal, HR and finance issues. HLB is structured to comply with host countries’ laws on practical issues such as tax, business practices and human resources. The most important thing is to strike the right balance between the requirements of international standards and responsiveness to local conditions,” says Andersen.

“Our member partners are legally independent, but they have to comply with HLB’s own standards that are favourable to the business and that comply with the required international standards,” the chairman added. 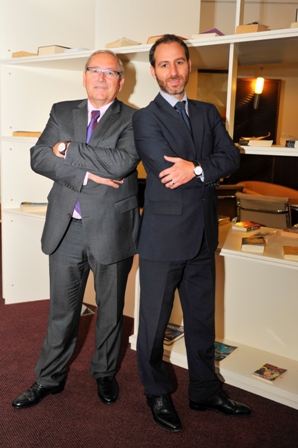 Mogens Andersen, and Marco Donzelli: “HLB is venturing into markets where “we feel we’re not covered well enough.”

With different countries reacting to the financial crisis by implementing massive regulatory overhaul, many audit networks like HLB are devoting greater attention and resources into compliance with these regulations. But according to Donzelli, his network’s flexibility makes all the difference.

“These changing regulations tend to put a lot pressure in consultancy businesses, however HLB’s flexibility and adaptability to these changes has played an essential role in helping the network withstand rough currents,” Donzelli said.

On the same note, government regulations are on the rise, which also means that auditors are walking a tightrope as their risk of potential liability is increasing. This, the Chairman thinks will make auditors subject to increased litigation in the future. However, he says risks can be reduced by taking actions to mitigate against lawsuits, “for instance, by adding experts, additional reviewers, and providing other resources to the audit team.”

There have been reports about how audit firms are screaming about their increasing liability and saying that new standards like the IFRS, corporate and sustainability reporting and Sarbanes-Oxley have put them in a real bind by demanding a certain level of accountability. In Andersen’s assessment, these standards have no doubt impacted the audit industry in various ways, in the short and long term.

“The changes mandated by these new standards will, no doubt, affect both audit firms and their clients,” Andersen says.

“Traditionally, the issuance of new laws did not impact clients so much as audit firms since these standards applied to the conduct of the audit and not the preparations of financial statements. However, new requirements such as requiring auditors to document a complete understanding of their clients and the environments they operate in, will have a much more wide-ranging impact on how audits are performed.”

“These new procedures have made it more expensive for clients, because there are many things that auditors have to do to comply with the standards. In the end, the costs incurred are transferred to the client. Accordingly, companies need to have a clear expectation of how these new standards may affect their businesses, and should begin making preparations to minimise any negative repercussions resulting from implementation of these new procedures,” he warned.

“In Denmark, where I come from, we decided that these standards are becoming a bit too much especially for the small and medium enterprises. The Danish Institute together with the Danish government created another national standard that targets SMEs, and of course is complemented by the IFAC standard. This is a special tool and it works really well for companies. I wish other governments would replicate that idea. SMEs really do not need full audit, they can have what we call an extended review, which is something in between the review and full audit, just to come back to the client and say, we know it’s becoming too expensive but this should be an easier alternative for you,” Andersen explains.

With the profession undergoing perhaps its biggest technological change, no doubt that mobile devices, cloud computing, and analytics are faster transforming how accounting and audit is done. Advances in technology have made it possible for the auditors to work smarter and faster, and Donzelli saysHLB is also utilising the latest software, social media and technology-based analytics and tools.

“Today, the cloud and mobile devices including phones, tablets, ultrabooks etc, will continue to help further integrate technology into all aspects of accountants and auditors’ daily duties. Internet connectivity is helping us work more efficiently and exchange information more effectively. It will result to HLB leveraging the growing power and reach of the internet in everything we do,” says Donzelli.

The executives also addressed in detail the issue of risk management, saying that HLB is responding to today’s complicated risk landscape by putting it at the top of the network’s agenda.

“Today, more than ever before, risk capability plans should be in concert with the organisation’s business development plans. It should be leading, rather than lagging. Risk management capabilities should be prioritised and focused on the things that matter to move the needle for the organisation.”

So, how do they see risk management changing?

“We see much more connectivity. One of the recurring issues from our discussions over the past months has been that of connectivity and risk. Traditionally, risk management was as moving beyond compliance, whereas these days, it is being much more integrated and connected, playing a much larger role in decision-making across the organization —particularly in budgeting, investment and strategy.”

“In order to survive and certainly to grow every company should strive to innovate and move its business forward. Simply pushing forward without understanding and mitigating the risks ahead could ultimately lead to disaster in some form.”