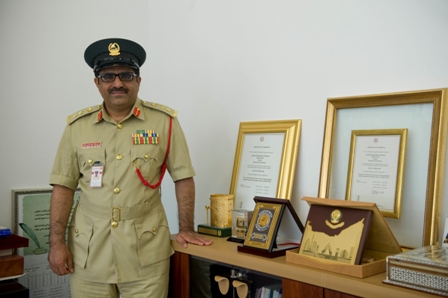 THE COP ACCOUNTANT: An accountant can deal with fraud as effectively as the police, Colonel Bin Abed says

FEW ACCOUNTANTS can be able to juggle a pen and a calculator on one hand with a Bushmaster M4 Carbine semi-automatic rifle, on the other. But for Colonel Saif Mohammed Saif bin Abed Al Muhairi, that constitutes his everyday work formula.

In an interview with Accountant Middle East, Bin Abed draws parallels between police work and accounting, saying that while the two fields may seem distantly unrelated, they have similarities in more ways than one.

“The economy, just like crime, has taken a global perspective,” he explains.

“The two continue to face the ever growing burden of fraud. Investigating fraud is one of many responsibilities held by the police, along with other regulators such as auditors and financial services regulators. Therefore an accountant can deal with fraud as effectively as the police.”

According to the Colonel, recent happenings in the global business marketplace have forced accounting professionals to “become familiar with converged accounting standards, taxation, risks and compliance. Similarly, with law enforcement, issues of regulation, control as well as international crime busting techniques are changing by the minute, and therefore we have to stay on top of these changes.”

“Likewise, in performing finance audits, we balance and compile financial statements, while at the same time we look out for irregularities in the books. Therefore, you can say that preventing corporate fraud in the office is the same as managing fraud in the streets,” he adds.

The charismatic cop says he however, finds greater satisfaction policing the books rather than chasing and investigating criminals in the streets of Dubai.

“I knew I wanted to become an accountant since my early school days. As a young Emirati boy I wasn’t like the majority of other students who had no idea what they were going to study for,” he says with a wide grin.

“In 1986 I joined the Emirates University where I majored in Finance. My core studies included accounting, auditing, investment banking and insurance. Upon graduating, I was employed by the Dubai Police in the internal audit department. Over the years I moved in different departments within the Force until I finally became the Director of the Finance department, which is my current position,” the cop says.

He credits his accounting background as pivotal to his police job. Now as the Director of Finance, Bin Abed feels like he’s come full circle.

In March 2012, he was appointed to head the UAE’s Accountants and Auditors Association (AAA) as chairman, a responsibility he says he ardently enjoys. The body, locally known as ‘Triple A’ is tasked with the promotion and development of accounting profession in the UAE.

“At Triple A, my duties mainly entail representing the association before the official authorities in the country and abroad, chairing the meetings of the General Assembly, and driving the agenda of the association in tandem with the strategy and vision adopted by the board of directors,” he says.

“I enjoy the camaraderie that I share with my fellow accountants at various interest group meetings that we frequently hold,” he proudly says, citing in particular the recent milestone where he was instrumental at forming a new joint professional task force.

“I was extremely delighted that this joint working group was formed. There are a number of issues that were discussed and the task force agreed to take upon itself to tackle them expeditiously,” Bin Abed said at the time.

At a first-of-its-kind meeting comprising of accounting and audit associations of the UAE, the associations resolved unanimously to set up a task force – a joint working group – that would meet on a regular basis to discuss critical issues affecting their members which include UAE nationals and expats from as far afield as UK, India, Pakistan and nationals from around the Middle East, all of which together add up to several thousand members in total.

“We are very hopeful that this joint working group can easily take upon itself, among several important issues, key tasks such as assisting the local authorities in the UAE to set up the much-awaited Institute of Chartered Accountants of the UAE, which I am certain, will be a welcome move and will be well received by all,” he added.

“The objective of this task force is to exchange expertise, knowledge, practices and experiences, and come up with joint initiatives to develop the profession, he said, adding that “The UAE’s AAA is very supportive of the formation of this joint action task force and we are extremely glad that this timely joint initiative on part of associations and accounting bodies based in UAE is a welcome move.” 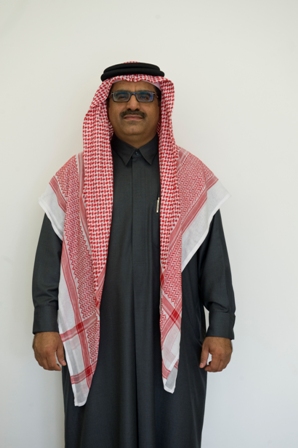 CALL OF DUTY: “I may wear different caps, literally, but as a police accountant, I greatly value the honour of going to work every day to do what I enjoy most.”

As Bin Abed beckoned me in his office located at the imposing fully-glazed-façade Police Headquarters in Al Muraqqabat, I couldn’t help but notice his wide-space beautifully designed office fitted with some modern futuristic elements.

The cop strides with a confident gait as he proudly shows off the various accolades adorning his office, a witness to the recognition that the Police Finance department has achieved under his watch.

“Recently, the General Department of Finance of Dubai Police received an award for being the most outstanding financial department for two consecutive years – 2010 and 2011. We were honoured by His Highness Sheikh Mohammed bin Rashid Al Maktoum, the Prime Minister and Vice President of the UAE,” he says, adding that “the evaluation was based on several accounting and financial criteria.”

“During and after the 2008-2010 global financial crises I learned the importance of working on and promoting the integrity of an accountant, and the necessity of objectivity and independence in the auditing institution,” he explains.

“Accountants, being the people that understand the most the financial data in their respective organisations, have a direct impact on the current and future strategic plans of companies.”

“Therefore it is imperative that both the private and public sector get updated on the new standards and auditing techniques and accounting forensics to minimise reporting mistakes in the future. Corporates should also invest in experienced professional accountants with a high level of integrity, and should build a strong internal audit unit that performs its role in an independent manner,” he advices.

And how does he juggle his accounting duties at ‘Triple A’ with his police career?

“I take it all in my stride. My work in the Police Force is intensive and of financial nature, while at the association, the responsibility is on voluntary basis and focuses mainly on technical accounting,” he says.

“However, the two roles are sort of similar in many ways in terms of planning, supervising, evaluating, implementation and development of projects.”

“I may wear different caps, literally, but as a police accountant, I greatly value the honour of going to work every day to do what I enjoy most,” he adds.