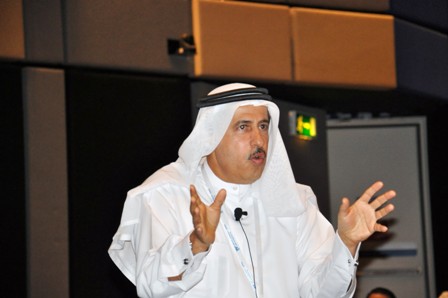 Chairman of UAE’s Institute of Internal Audit – Abdulqader Obaid Ali addresses delegates in Doha, during the annual conference organised by the Qatari Chapter of the IIA.

YOU MAY know hammour as that delicious grouper fish that belongs to the sea bass family.

Whether it’s boiled, smoked or fried, hammour has become probably the most popular saltwater food fish in the Middle East, but at a recent Internal Audit event, the delicacy got a new meaning altogether.

In his characteristic style of address where he habitually captures the audience with his unique, interactive, simplistic yet most logical manner to drive the idea home, Abdulqader Obaid Ali laid bare the malaise that ails the modern Internal Audit function, particularly in the region.

For the entire morning duration, speaker after speaker bombarded the delegates inside the auditorium with mind-numbing technical lectures that sometime tended to get unexciting. But when Abdulqader arose to speak, he veered off the norm as he swiftly attached a wireless microphone on his snow-white kandura and proceeded down the staircase, where he roamed the floor of the auditorium to ‘interact’ with the seated audience, rather than formally addressing them from raised platform. He did not hide his loathing of ‘Powerpoint’ style of presenting.

With a perceptible smile and a blade of satire that he meticulously combined to send his message across, Abdulqader lit up the faces of the audience with his ‘hammour’ analogy, which he used to describe the different relationships that exist in many organisations, emphasizing that Internal Audit function needs a complete overhaul.

Play minor role
The President has the sly faculty of making himself clearly understood. His thoughts are strong and powerfully joined together. His style of speech is mostly rhetorical, but precisely logical.

So, with hands thrust behind his back, he opened up the discussion in a splendid rhetorical style.

“It is unfortunate that the internal audit function continues to play only a minor role in many organisations in the Middle East region. Corporate governance is seen largely as the province of the ‘big hammours’,” he sent the crowd rolling with laughter, while referring to senior management.

“Good governance is a journey that begins with a broad, organisational perspective. While boards of directors, legal compliance officers and senior leadership are often driving the course, this narrow view can restrict improvements to the corporate governance process.”

“Internal auditors should not be viewed as ‘small hammours’, as business leaders expect them to play a more strategic – rather than merely tactical – role in the governance process.”

Impact on business
Abdulqader cited recent regulations, including an emphasis on anti-fraud and whistle-blower provisions and the potential impact on the business market, which have compelled auditors to take a more active role in corporate governance.

“We have a long way to go, but making steady progress requires committed senior leadership, integrated planning, coordinated execution and constant monitoring by both the ‘big and small hammours’.” 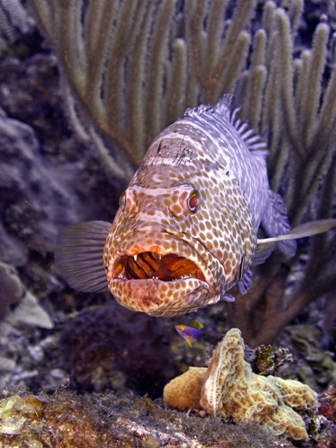 Hammour has become probably the most popular saltwater food fish in the Middle East, but at a recent Internal Audit event, the delicacy got a new meaning altogether.

Every point he touched upon was received with a thunderous applause of approval. It was replete with good humour, sound reasoning and spoken with that perfect command of the language that is, matter of factly, not so eminently common among most orators in this region.

“Investment decisions usually come from top management. Internal audit support is critical for successful implementation, especially for a project that requires a large budget and affects operational processes. All these levels that make up the organisation need to work for the overall success of the business, otherwise the result would be a situation that’s akin to ‘a surgeon who did a successful surgery, but the patient died,’” he said to the amusement of the audience.

“The rewards of improved corporate governance encompass more than a greater sense of organisational accomplishment,” he added.

Improve risk management
With hand gestures, eyes flashing and occasional foot-thumping, the President used every body movement to express his ideas.
He observed that increased regulatory scrutiny as well as directives from executives to strengthen controls and improve risk management, has made the internal audit’s responsibilities grow exponentially in the recent years.

Speaking about usage of Information Technology, Abdulqader bemoaned the failure of internal audit departments to make good use of technology to improve the quality and efficiency of its assurance and consulting work.

“While we now have audit software tools available, auditors are still using archaic and traditional ways of doing work,” he quipped, adding, “They need to catch up with the rest of the world by integrating technology in their audit process.”

Culture of ‘wasta‘
Addressing the contentious ethical issues presented by ‘wasta’, Abdulkader rebuked the ‘wicked habit’ based on cronyism, favouritism, and nepotism in the hiring process, urging business leaders to recruit the right, competent and ethical people.

“We need to kill the culture of wasta!” he shot.

‘Wasta’ is an Arabic term widely used in the region to describe the unprofessional practice of giving preferential treatment to relatives and friends in employment.

“Nepotism, cronyism and favouritism have the greatest negative effect on the overall performance of the organisation. As leaders, we have the obligation to recruit professionals on merit,” he said.

As he continued with his address, the auditorium grew warmer and at this time people started raising hands to ask questions and the venue almost became an open house. Abdulqader spoke nearly 30 minutes, the allocated time, but it was obvious from the crowd’s reaction that many wanted him to continue