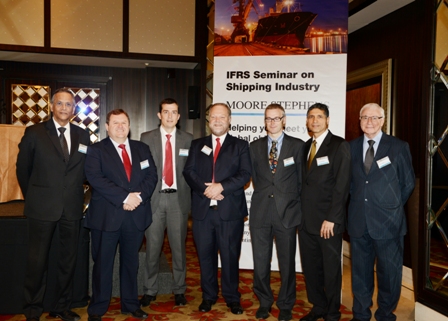 Partners with Moore Stephens pose for a photograph during a recent seminar on IFRS for the Shipping Industry. The firm is noted for a number of industry specialisations and is widely acknowledged as a leading shipping adviser.

THE DIFFICULTIES experienced in recent years with freight rates and vessel values arising from the slowdown in the global economy and in international trade have been accompanied by issues arising in connection with financial reporting for shipping companies.

In particular, there have been questions relating to vessel impairment, residual values and useful economic life for the purpose of depreciation calculations, charter terminations, financing issues and going concern.

These subjects formed the basis of a seminar organised by Moore Stephens, widely acknowledged as the world’s leading financial adviser to the shipping industry, held recently in Dubai. There were approximately 100 attendees at the high profile event, representing a broad spectrum of the regional shipping fraternity ranging from ship owners, to brokers and ship managers.

Specifically, the seminar sought to highlight and clarify to senior shipping personnel the impact of those International Financial Reporting Standards (IFRS) most relevant to regional shipping companies in the current economic climate and highlighting the importance of implementing robust risk management systems.

It also looked at some of the key proposals for the future of financial reporting and how these could affect shipping companies. The key speakers were from the shipping departments of Moore Stephens in Dubai and London. The topics included an initial overview of global shipping and IFRS financial statements, accounting for ships, financing issues, risk management for shipping companies, current accounting issues and a summary of recent and future accounting developments.

John Adcock, a Partner with Moore Stephens in Dubai and Chairman of Moore Stephens International Middle East, said, “Moore Stephens has accumulated an unparalleled depth of knowledge and unrivalled experience, and is therefore in a unique position to provide the growing shipping industry in the region with the relevant advice and support across a range of services.”

Farad Lakdawala, a Partner with Moore Stephens in Dubai began the seminar by providing an overview of the development and use of financial statements in accordance with IFRS by companies in the region and explained that financial statements prepared in accordance with IFRS for SME’s is not yet widely adopted by companies in the region.

Richard Greiner, a Partner with the Moore Stephens shipping team in London, outlined the key issues that arise for a shipping company generally in its financial statements. Richard then spoke in detail about accounting for the principal asset of a shipping company, the vessel.

This covered an explanation of the nature of the costs which comprise the asset, including the treatment to be adopted for dry docking and special survey costs, an explanation of which amounts can be capitalised and so added to the vessel cost, and which amounts would be repair costs that should be expensed through profit and loss. The accounting impact from changes in the useful economic of vessels, including early scrapping, was also explained.

Jamie Tomlin of the Moore Stephens London technical department spoke in detail about a number of financing issues in the current economic climate and the challenges facing some shipping companies arising from loan covenant breaches and the restructuring of loan facilities.

Michael Simms, also a Partner with the Moore Stephens shipping team in London spoke in detail about the accounting challenges arising from impairment, provisions and claims, and onerous contracts, and explained how these can be addressed for financial reporting purposes. The difficult conditions experienced by some sectors have led to severe downward pressures on vessel values, with consequences for the strength of the balance sheet.

Michael also explained how the existence or otherwise of an impairment should be determined, recognising that this can be extremely difficult where there is only limited activity in vessel transactions to support broker valuations and that the complexities in calculating value in use can be equally challenging. The effect of these factors on the going concern status, and the possible consequences that follow where this may be in doubt, were also explained.

Robert explained how senior management and those charged with governance can improve the formal process of identifying and mitigating risk by the use of Enterprise Risk Management (ERM) software, which included a short introduction to the Moore Stephens on-line risk management software system called “Rhiza”.

Robert provided examples of identified risks relating to shipping companies such as crewing, safety, environmental, and regulatory. Finally, Robert explained the process of identification and mitigation of risks in the context of shipping companies and reiterated the growing importance of implementing timely and efficient risk management systems.

Accounting and reporting is fluid.  Being knowledgeable about changes to accounting requirements presents a further challenge, requiring the preparer of financial statements to understand how standards have changed, the effect on financial reporting and the need to plan for system changes to capture information to enable compliance.

The seminar ended with Jamie Tomlin outlining some recent developments, including changes to the determination of the nature of interests held and whether they comprise a subsidiary in accordance with IFRS10 (Consolidated Financial Statements), or, where sole control is absent, whether they could be a joint venture or joint operation in accordance with IFRS11 (Joint Arrangements).

The changes which came into effect in 2013 require an assessment of whether one party has power over another such that it can use that power to affect the amount of return, and possibly profit, that it is exposed to. 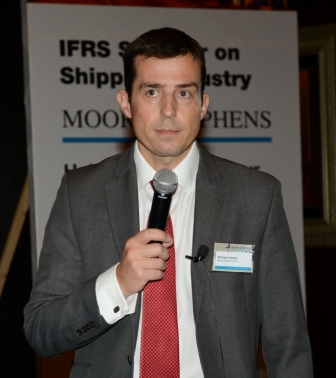 Michael Simms, a Partner with the Moore Stephens shipping team in London spoke in detail about the accounting challenges arising from impairment, provisions and claims, and onerous contracts, and explained how these can be addressed for financial reporting purposes.

There is greater emphasis on looking at returns and the relevant activities that most significantly affect those returns. This has particular relevance for the shipping industry through the use of pooling-type arrangements or in the case of more complex arrangements.

For example, there have been a number of cases in recent years of shipping companies being unable to meet their debt obligations. If the vessels operated by such companies are then sold, no accounting issues arise and the bank has simply realised its loss. In some cases, though, the bank does not wish to sell the vessel and it is transferred to a new entity in which the bank retains some form of interest. The question is whether, in such cases, that entity is a subsidiary of the bank.

The ability to engage early in the development of standards and to try and influence the direction they take was brought to mind when considering the direction in which the International Accounting Standards Board (IASB) is headed with its future proposals. Fundamental to this for the shipping industry are the proposals for accounting for leases which in the fullness of time are expected to replace IAS17 (Leases).

Jamie explained to the delegates at the seminar the most significant changes in the proposed IFRS relating to accounting for leases, in particular the move towards recognising all leases, other than very short ones in the balance sheet.  The proposals would remove the fundamental difference in accounting for leases that arise under current standards where the distinction between an operating lease and a finance lease may be very fine.

The IASB recently issued a second exposure draft dealing with leases, following on from the draft issued in 2010. There have been many changes to the proposals since the original draft. But the key proposal has not changed; the IASB continues to propose that all leases of more than one year will be recorded in the balance sheet as an asset and a liability by the lessee.

Jamie said, “If the proposals go through, many shipping companies will find that their accounts change substantially. The greatest impact will be on those who charter in tonnage, whether under bareboat or time charters, where those charters are currently classified as operating leases. In simple terms, such companies will have to record their interest in the vessels as an asset with a corresponding liability, at the fair value of the future payments under the charter.”

For time charters, the amounts payable will need to be split between the bareboat element and the service element. Only the bareboat element will give rise to an asset and liability. The current even spread of chartering costs will also often be replaced with a front-loaded model, so that the early periods of a charter will reflect higher costs than the later ones.

The proposed changes will also affect owners chartering out tonnage, but in their case the impact will be much less. After all, they already have an asset in the balance sheet, so altering its classification is not so dramatic a change.

There have been extensive discussions relating to two exposure drafts on leasing but, as Jamie noted, the proposals have probably received more attention than many other standards due to their significant impact upon some key industry sectors.  It is likely that there will be further amendments from the second draft.  If a new standard is issued it may not be effective for another three to four years. Its importance to – and impact on – all aspects of the shipping industry cannot be understated, and Moore Stephens is ideally placed to advise on this as the proposals develop.

There were a number of questions raised by the delegates, which stimulated thoughtful discussion throughout the day and the feedback from delegates was very positive. Overall there was strong support for more shipping industry-specific events of this nature in the future.