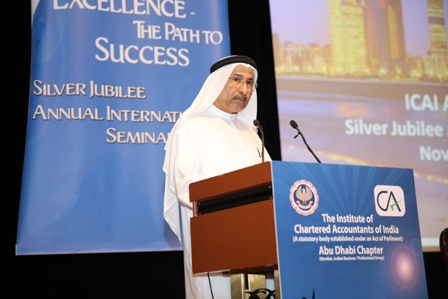 Governor of Central Bank of the UAE, H.E. Sultan Bin Nasser Al Suwaidi addresses the delegates during the conference.

PROFESSIONAL BODIES need to push for excellence as they endeavor to improve the skills, knowledge and expertise of their respective members, Governor of Central Bank of the UAE H.E. Sultan Bin Nasser Al Suwaidi, has said.

Al Suwaidi was addressing delegates during the recent high profile seminar organised by the Abu Dhabi Chapter of the Institute of Chartered Accountants of India (ICAI), to mark its Silver Jubilee. The seminar was attended by over 650 delegates.

“Professionals and professional bodies have an even more powerful role to play as part of the self-improvement and regulatory landscape,” the Governor said, while applauding the efforts the Abu Dhabi Chapter of ICAI have continued to contribute the development of the Capital’s economy.

He also praised the ICAI Code of Ethics as one of the most comprehensive document on integrity, “which needs to be complied by all members.”

Chartered Accountant (CA) Padmanabha Acharya, Chairman of the Chapter, in his address, mentioned that the Abu Dhabi Chapter has come a long way since its humble beginnings in 1984.

“The pursuit of excellence in its activities has been the core strength of the Chapter, and the theme of ‘Excellence – the Path to Success’ selected for the Silver Jubilee seminar is highly relevant in today’s context,” he added.

Acharya quoted the famous Confucious in his address, saying “the will to win, the desire to succeed and the urge to reach your full potential… are the keys that will unlock the door to personal excellence.”

Similarly, while addressing the delegates, CA Subodh Kumar Agrawal, ICAI’s President, (parent body of Abu Dhabi Chapter), mentioned that the Abu Dhabi Chapter is the second biggest overseas chapter amongst 22 overseas chapters. He reaffirmed that independence, integrity and excellence are inherent parts of ICAI’s motto. The President reminded the attendees on key ICAI initiatives and challenges ahead in the path, stressing on the importance of the ‘3 Vs’ (Value, Virtue and Vision) as qualities of a successful leader.

The seminar brought together a galaxy of experts and leaders who tackled various in seven power packed sessions including two panel discussions and covering various relevant topics.

Dr Karim El-Solh, Co-Founder and CEO of Gulf Capital, focused on the Gulf as a viable private equity investment destination. He mentioned that GCC countries are doing a great job at diversifying their economies with a consistent track record of growing at a faster rate than the global economy and most emerging markets.

Quality of a good leader

Another key note speaker, Adel Abdullah Ali the Group CEO of Air Arabia, provided a glimpse of his career journey and how he overcame the hurdles along the path. With a start of 2000 passengers, Air Arabia today carries 6 million passengers annually. He mentioned that the main quality of a good leader is “when the people work with him, not for him.”

On the second day of the seminar, CA J Rajasekhar Reddy, the first 100% visually impaired Chartered Accountant in India, shared his success story elaborating how his parents, mentors, friends and teachers helped him in accomplishing great strides in his career. He said that ‘Inspiration, Aspiration, Perspiration and Desperation were the four key words that nudged him on, adding that “physically challenged people need opportunity, not sympathy.”

Decorated author who is also India’s former Chief of Army Staff, General J. J. Singh presented his views on national concerns and leadership, saying that “whether you lead five men or five million men, the essentials of leadership are the same.” He also quoted that “if a man does not know what port he is steering to, no wind is favourable.”

In another session, Vice President CA K Raghu elaborated key ICAI initiatives in the fields of Corporate Governance, XBRL, IFRS, CPE, Technology and ICAI Regulatory rules. He stated that in today’s era, “specialisation is the new mantra for success.”

Meera Sanyal, the Chairperson India Services and Foundation, Royal Bank of Scotland, Seema Shetty, MD and Founder of BiteRite and Zari Zardozi and Rana Salhab, Deloitte’s Partner, Regional Talent & Communications, participated on a panel discussion on the role and success of women in business and society. The panelists mentioned that today, “women need equal employment opportunities, not reservation of seats.” The discussion was moderated by CA Rajiv Shah, CEO, Gulf Investment Consultants and Vice Chairman of the Chapter.

The event was followed by a gala dinner and live entertainment performance by prominent Bollywood singer, Shaan which was attended by over 3,500 people. He enthralled the audience with a non-stop electrifying performance.

During the evening event, the Chapter also presented the “Business Super Achiever” award for 2013 to Mohan Jashanmal, Chairman of the Indian Business Professional Group, Regional Manager of Jashanmal National Company (Abu Dhabi, UAE) and Shareholder of Jashanmal Group of Companies, and Nilesh Ved, Chairman and Founder of the retail conglomerate Apparel Group.

Jashanmal was also past Chairman of Indian Social Center and Abu Dhabi Indian School. He also received Pravasi Bharatiya Samman Award for the year 2010 and was awarded the Rising Entrepreneur of the Year Award for his outstanding contribution to the Industry & India Rising as Chairman of Indian Business/Professional Group.

Nilesh Ved is a renowned name in the retail fashion industry. In a journey of just over 14 years, his Apparel Group has grown from one store to over 900 stores, representing about fifty recognised brands in the world like Tommy Hilfiger, Aldo, Kenneth Cole, Tim Hortons, Cold Stone Creamery, Charles & Keith, Dune, Nine West, Aeropostale, Sketchers to name just a few.

Another award for “Excellence in Finance” for 2013 was received by CA T. K. Raman, Group Chief Financial Officer, Finance House PJSC. CA Raman is a well-respected leader who practices the “discipline of getting things done” within time and cost budgets.