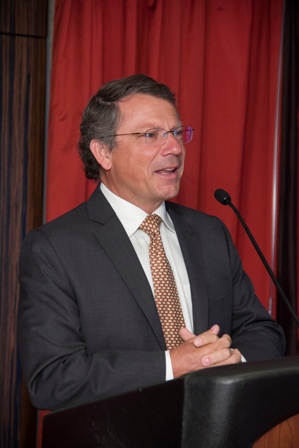 Peter Beynon, ICAEW’s Middle East Regional Director – “The judging process is rigorous and has been carefully designed to ensure that proper and scrupulous consideration is given to each candidate. The lynchpin is the 11-strong judging panel.”

THE INSTITUTE of Chartered Accountants in England and Wales (ICAEW) has officially launched the nominations process for its third Middle East Accountancy and Finance Excellence Awards. The process will culminate to a glamourous event slated for December 11, where ICAEW will honour the best performing firms, teams as well as individuals.

“For the first time, the awards will be coming to Abu Dhabi, at the Ritz Carlton, and we will spend an evening recognising and applauding the achievements of the cream of the profession from right across the region,” said Peter Beynon, ICAEW’s Middle East Regional Director.

“The awards were conceived with a simple premise; we believed finance professionals were not receiving the same accolades as their counterparts in, for example, management, despite their work being vital to business,” he added.

It is fair to say accountancy has historically suffered from something of an image problem – ‘bean counters’ or ‘men in grey suits’ – and still doesn’t quite have the cachet of making moves and running deals. But without finance professionals there are no moves nor deals.

“We wanted to address this perception problem, and also to show bright, hardworking young people that there was a rewarding career to be had in finance. Of course the awards ceremony itself also provides a great networking opportunity, and we hope to simply present an enjoyable occasion,” the director added.

“We wanted to address this perception problem, and also to show bright, hardworking young people that there was a rewarding career to be had in finance. Of course the awards ceremony itself also provides a great networking opportunity, and we hope to simply present an enjoyable occasion,” the director added.

Past keynote speakers during the awards event have included Sir Ian Botham and Lord Sebastian Coe and this year the host will be broadcaster Clive Anderson, “But this is not to detract from overall aim of the Excellence Awards – to plant a flag for the profession,” Peter quipped.

A global profession
ICAEW boasts over 141,000 members in over 165 countries worldwide. While the event began in Dubai three years ago, the location of ICAEW’s Middle East regional office, the awards are for businesses and individuals from across the whole region.

According to Peter, this year the awards event will take place in UAE’s capital Abu Dhabi for the first time, “and we are hoping in the future to take the event to other finance hubs in the region, reflecting the growing importance of the profession across the entire GCC.”

“It is right that we started in Dubai, where there is the greatest concentration of our members, but this event is for the whole region and it is now time to ensure that the awards belongs to the profession right across the region,” the executive added.

Recognising excellence
Nominations are open to anyone who is, or who knows, a finance professional demonstrating excellence. This ranges from bright, hardworking young people at the beginning of their careers to ‘grizzled veterans’ who have reached the pinnacle of their chosen field, and everyone in between.

The categories span individuals and organisations working in practice or business and even education providers. At the team level, there are awards for Corporate Finance Deal of the Year and Business Finance Team of the Year.

Excellence is also recognised by separate categories for Financial Reporting, Internal Audit, and Training and Development of Finance Professionals. New for this year is a category of excellence in the Development of the Country’s Future Leaders, and a separate award for Accounting for Sustainability.

At the individual level we have CFO of the year, Outstanding Business Leader of the Year and Young Accountant of the year. The awards are not just limited to chartered accountants; we also have a category for Financial Journalist of the Year.

“It would be impossible to recognise every single contribution made by the finance profession to business, the economy and society, but we believe that this marks a good attempt,” Peter said.

“The category of developing future leaders is a good example of how the awards process is evolving; this is designed to highlight the fact that the discipline and rigour of the finance profession is not just about making money, it can also provide the foundations for leadership at the highest levels, contributing to the public benefit.”

“Choosing the categories is an on-going and developing process. We rely not only on the expertise of our members, who work in all aspects of the finance profession and have, collectively, many decades of experience, but also on feedback from other key contacts and stakeholders. The nomination process, by contrast, is extremely simple; it consists of a short online form which needs to be submitted by November 1,” the Director added.

Judging the best
The judging process is rigorous and has been carefully designed to ensure that proper and scrupulous consideration is given to each candidate. The lynchpin is the 11-strong judging panel.

The judges are selected from highly-respected leaders of business, accountancy and finance, and in the past have included chief executives and company founders, chief financial officers, auditors, standard setters and public servants. Entries are reviewed by the panel and judged according to the individual criteria for each category. Finally, having identified a shortlist, the panel selects one winner for each award.

“The awards are open to everyone, and each nomination is judged individually on its own merits. We are particularly keen to encourage nominations from firms of all sizes. ICAEW does not believe that quality means different things for different companies; to be an ICAEW Chartered Accountant means to have demonstrated the highest levels of professional, ethical and technical standards, whether working for a large, medium or small firm, in business or in practice,” said Peter.

Leaders in their field
Winning one of the awards categories means that a nominee has been judged to have shown exceptional abilities, dedicated diligence and inspirational application. Moreover, they have been assessed by a panel of leading financial and business experts who have collectively seen almost everything there is to see in the finance world.

Last year, Bahrain’s Tamkeen won the award for Training and Development, highlighting the efforts they have made to ensure that Bahrain has a talent pool of highly qualified finance professionals capable of stewarding the country’s continued economic prosperity.

It is now estimated that almost 80,000 Bahrainis and Bahraini businesses have benefitted from Tamkeen programmes to date, with that number expected to rise to 150,000 in the near future.

According to Peter, Bahrain remains one of the key financial services hubs in the region, “and shows every sign of having overcome the challenges it faced in the aftermath of the unrest two years ago.”

Where individuals are concerned, it is perhaps no surprise to see that awards winners go on to shine brightly. Since winning the last year’s CFO of the Year award, NMC Healthcare’s Prasanth Manghat, has helped steer his company to post significant profit increases with NMC providing healthcare to over one million patients in the first six months. And last year’s Chartered Accountant of the Year, Chris Taylor from Abu Dhabi Finance PJSC, was this year promoted to the position of Chief Executive Officer.

“Clearly, being feted by leading experts in the industry as one of the best and brightest of a generation is going to add significantly to any professional CV; the winners of this year’s awards will be names to watch for the future,” Peter said.

Showcasing the profession
The overall benefits of the awards are not just to be measured in the successes of the winners, but also in the overall attitude towards the profession in the region. Part of the overall aim is to raise the profile of the accountancy profession and make people aware of all the hard work that is done behind the scenes, but also to demonstrate that there are great careers to be made in this industry.

Many Middle East countries are investing significantly in economic diversity, trying to reduce the heavy reliance on oil and hydrocarbons, but oil is such a huge part of the economic successes of the regions that countries can face an uphill struggle.
According to Peter, there have also been challenges associated with attracting nationals into the private sector.

“By raising awareness of the rewarding careers available to highly-qualified finance professionals ICAEW hopes to demonstrate that working in the finance profession is one way to access a career that is rewarding in many aspects, and can lead to great things,” he said.

“Increasingly, finance professionals are stepping out of the ‘back room’ and going on to leadership and strategic positions, first as CFO and in many cases later as CEO. At the same time, having an internationally-recognised qualification means being respected worldwide as working to the highest professional, ethical and technical standards. ICAEW hopes that celebrating the cream of the crop will be one way to demonstrate that chartered accountancy is a career where bright, hardworking people can have an opportunity to shine,” he added.

Laying the path to prosperity
The Accountancy and Finance Excellence Awards has become part of the annual calendar of the finance profession in the Middle East.

“Obviously we hope that the chance to gather and celebrate with some of the profession’s leading lights will be an attraction, but the real message of the awards is that a strong profession is essential to any economy,” the Director said.

The Middle East is currently in a fascinating and unique position. It has a large, and growing, population with a number of young people, meaning that with the right investment in training and skills it has the capacity to develop a huge pool of talent for the future.

At a time when the balance of economic power appears to be shifting eastwards, the Gulf States are enviably placed in order to capitalise on the need for global trade and finance hubs. Equally, the region is fortunate in having tremendous natural resources which mean that – at a time when much of the developed world is facing austerity conditions – there is the capability to invest in long term prosperity, whether in infrastructure or education.

“ICAEW believes that the accountancy profession makes a vital contribution to the economy and society in the region, and has the capability to continue doing so for many years to come,” Peter said.