Sameer Al Ansari has more than just a famous last name. The ICAEW-certified accountant narrates his family’s incredible journey as immigrants from Palestine to the big business entrepreneurs they are known for in the UAE, today… 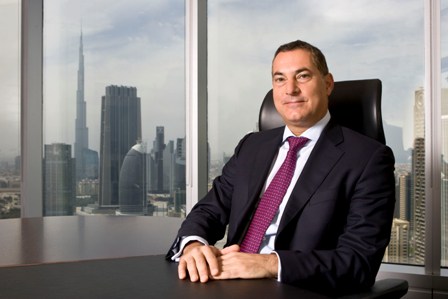 SET FOR LIFE: At a young age of 15, Sameer Al Ansari decided to pursue accounting. He had a sharp, defined vision of where he wanted his success to come from.

PASSION. PEOPLE. PURPOSE. These three principles have guided Sameer Al Ansari’s personal and business life from his humble beginning in Dubai in 1969 to going on to hold numerous CXO positions of multi-billion dollar companies.

Until recently, Al Ansari held the position of Chairman of Dubai International Capital – a large Government-owned investment company – as well as Jordan Dubai Capital and as CEO of Shuaa Capital.

A true rags-to-riches story, Al Ansari’s life is proof that with passion, good mentors and associates, and a strong belief in oneself and one’s work, anything is possible.

Al Ansari describes Dubai in 1969 as “a happy village” when he and his family emigrated from Palestine with nothing but each other. They had no family or friends waiting for them when they arrived, and were buoyed only by his father’s vision and bravery. Al Ansari recalls, “We literally started with absolutely nothing. My father, like many others from many parts of this region, came to Dubai with nothing.”

But that didn’t last long. Although the memories of the war in Palestine still flashed fresh in his mind, his father was determined to make a good life for his family. Starting from the ground up in this quiet, coastal town, he quickly began building a small empire.

“Out of necessity he did everything. He created one of the first coffee bean shops in Dubai. He was importing coffee beans from Aden, Africa, Iran and selling them to traders and retailers in this part of the world…He, with a group of young entrepreneurs , created the first Modern Bakery in Dubai, the first retail boutique in Dubai – Allied Enterprises, and the first dairy company in Dubai, Gulf & Safa.”

Al Ansari adopted not only this entrepreneurial spirit from his father, but also his positive attitude towards life. He describes him as a happy man who was loved by all who knew him.”

Even through many hardships, Al Ansari’s father demonstrated constantly how important it is to “stay positive no matter what you’re going through.” This upbeat attitude would serve Al Ansari well during the financial crisis of the late 2000s.

Even though they were immigrants from a war-torn country, Al Ansari’s father gave him and his brothers the most valuable gift a guardian can give: “Whatever money he had he put it towards getting us the best education.”

The chance of success in life

Al Ansari says that a person can be successful if he works hard, and gives it his best shot, but he also warns that a person won’t get very far without a good schooling. Education was not only a foundation to a better life for Al Ansari, but also one of survival. As immigrants from Palestine, his parents knew what their children were up against.

Al Ansari recalls; “Education was always the top priority for my parents. You’re a Palestinian who cannot live in your [own] country so wherever you are in the world you are a foreigner. So always remember that you are starting one step behind everybody else. You have to work harder. You have to somehow show that you’re better than everybody else just so that you are on par with them. And education is key to getting you there. That was our weapon. You are armed with your education and that was going to help you get where you wanted to be.”

And so, with the guidance of his family, Al Ansari decided at the young age of 15 to become a chartered accountant. Unlike most adolescents, he had a sharp, defined vision of where he wanted his success to come from. He says he knew he would be ‘set for life’ if he could become a chartered accountant in combination with being an Arab speaker. So he moved to England for school at the age of 15, and went on to university there.

After years of studying and grueling exams, and “people…falling like dominoes” under the stress of the ICAEW exams, he fulfilled his dream in 1987 when he passed his Chartered Accountancy exams having received his Honors Degree in Accounting & Financial Management and a Diploma in Industrial Studies from Loughborough University in 1985.

Now fully armed and ready to tackle the world, he immediately moved back to Dubai with Ernst & Young and for the next twenty-five years held many top-level positions in a number of large companies, including as CFO of Dubai Aluminium Company (Dubal) and the Chief Financial Officer to the Executive Office of His Highness Sheikh Mohammed Bin Rashid Al Maktoum. He also served as Chairman and CEO of Dubai International Capital and CEO of Shuaa Capital. In 2009 Loughborough University bestowed upon him an honorary doctorate for outstanding achievement.

The formula for success 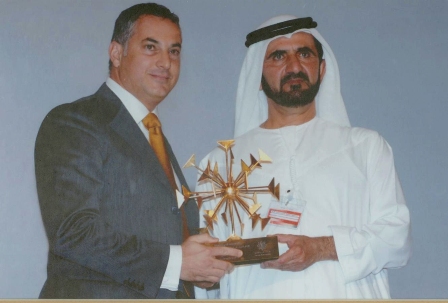 Busy doesn’t even begin to describe Al Ansari’s career. So the question arises: how does a person work so hard, do so much, and maintain a stable mind?

“You must try to create a balance, I am a Libra so it comes easy to me. Between work, family, life, and everything that you want to do and that you’re passionate about. P is for passion. It’s one of my key words because I truly think: don’t do something if you aren’t going to do it passionately. Your work, sports, love, family: you have to be passionate about things. Otherwise, don’t do them. That was always important to me in whatever I wanted to do.”

But it hasn’t all been easy. Al Ansari learned early on when he took on the challenge of the professional accountancy exams that quitting was not an option because each time he was tempted to throw in the towel, he says “I remembered how hard my father worked to get us a decent life. How utterly hard we worked…and thinking to myself ‘I’m not going to let them down now. I’ve got to get through this’.”

This resiliency and adaptability have become a part of Al Ansari’s purpose in his career. Leading the global investment company, Dubai International Capital, from its inception in 2004, Al Ansari grew the business from “three employees on Day One to 120” and into a multi-billion dollar investment establishment. In 2006 His Highness Sheikh Mohammed Bin Rashid Al Maktoum awarded him the Young Leaders’ Award for Finance.

He describes his proudest moment a year earlier when His Highness Sheikh Mohammed and with the support of His Excellency Mohammed Al Gergawi, gave Sameer and his family a UAE Passport.

“This was the highest level of recognition I could ever wish for. I have lived for most of my life in Dubai, it was home and where all my children had been born, it was truly my proudest moment,” he says.

When the recent global financial crisis struck, Al Ansari did not panic or slip into denial.

Being the CEO, he describes how he handled the situation in the midst of the madness;

“Here you are the chairman of an investment company that’s owned by His Highness Sheikh Mohammad with 13 billion dollars of assets under management with investments all over the world and you are witnessing the worst financial crisis in history and trying to…understand what’s going on, because the most seasoned professionals in the world couldn’t understand what was going on. You had to ask yourself what are the consequences? How far will this go? And will we see the great crash of the 1930s, or worse? And most of the analysis of the time was not very positive at all, most of the analysis said this was going to be worse than ever.”

Through his past experiences of overcoming adversity and handling extremely challenging situations, Al Ansari says he survived the crisis by “adjusting to the new realities” instead of ignoring them or hoping, like many were, to “wake up from the nightmare.” He notes that the most successful companies had CXOs who reacted quickly to the changing tides.

During 2008, even before the crisis, Al Ansari was saying, “It’s not about return on equity, it’s about return of equity.” To survive, the key was minimising the amount of damage by conserving money instead of trying to further capitalise on it.

“…lessons were learned. I think everybody who went through it learned the hard way, and those are usually the best lessons, because those are the lessons that you don’t forget. Whether it’s a big crisis or a small crisis, for all of us at different stages in our career, we will have these things happen to us. Learn from them.”

Al Ansari mentions again one of his important principles – people – in dealing with the crisis:

“Luckily I had an executive board made of very senior people from all over the world…that helped me separate the emotions of being the founder…to doing things by the book and doing things as any world-class organisation would.”

“It’s always very important to find someone who can help you along your journey,” Al Ansari says about the significance of having a good mentor.

He mentions four by name: at Ernst & Young it was Edward Quinlan who helped him in his early career, then Mohammed Al Abbar in the early 1990s who believed in him so much and threw him into the deep end as CFO of Dubal at the tender age of 30 and whilst at Dubal Ian Rugeroni, whom he describes as “a great and wise mentor who taught me so much, every time I felt the pressure, he would help me get up there again and gave me the confidence to do it,” and most recently, Mohammed Al Gergawi “who instilled so much confidence in me and gave me the opportunity to shine.”

Surrounding oneself with good people is important, he remarks, but he cautions against relying on others or becoming arrogant.

He gives this advice;

“You may be given a chance, but you still have to deliver…You have to lead by example. Show you are passionate about what you are doing. Show that you believe in what you’re doing…It starts with you believing in yourself. And I’m not saying be arrogant. Be confident. There is a fine line. If you don’t believe in yourself why would anyone believe in you?”

His final words of guidance to anyone at any point in his or her career echo his early observations of his intrepid father, “Keep a smile and keep going and never forget your family, they are your most valuable asset!”

He is very proud to add that his eldest son Sarri is following in his footsteps and has recently joined E&Y in Dubai with ambitions to be a chartered accountant.