Formal education and professional qualifications such as becoming a Chartered Accountant will earn you a living. But self-education will make you a fortune, declares James Mathew, Managing Director at Crowe Horwath. Mathew, who is also the Chairman of the Institute of Chartered Accountants of India, tells the story of his childhood, his steadfast morals and his thoughts on the role and future of the Indian Chartered Accountant in the UAE… 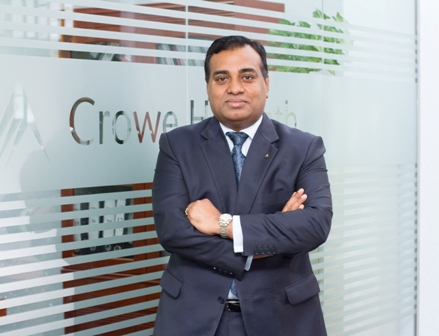 HIS LIFE worked out in a way he once considered impossible. James Mathew was born and brought up in a middle class family in a small Indian state, popularly known as ‘God’s Own Country’ – Kerala.

A good job with a decent lifestyle in Kerala was a distant dream back then, unless one decided to leave for overseas and try their luck elsewhere.

Mathew attributes his achievements to his mother, whom he says ‘has been my role model in every way’.

“She [mother], has gone through numerous tribulations but her insurmountable faith in God was her path out of the dark voids,” his eyes light up when talking about his mother.

Waxing philosophical, James continues; “According to my mom, difficulties and obstacles, minor or major, creep into your life almost on a daily basis. One should have the real courage and conviction to look at each ordeal and ascend over it, victorious; it all depends on your outlook.”

Education and immigration
Despite hailing from such a progressive city in the bustling Calicut, Kerala, it wasn’t until Mathew was in university that he knew what he wanted to pursue as a career, as a vocation.

He recalls; “In my first and second year, I regularly attained 100% scores in mathematics, and I was the only kid in the college who did so. My professor counselled me to become a Chartered Accountant so I followed his advice.”

To this very day, Mathew says he is still eternally grateful to his professor for that small piece of advice.

After receiving his degree in Mathematics, Mathew started his internship at a small firm. He completed that in just over three years, but then faced the dreaded exam with the Institute of Chartered Accountants in India (ICAI).

“The ICAI is one of the toughest exams,” James says.

In his true humorous form, the Chairman of the ICAI-Dubai Chapter quips; “Outside the Chennai Regional Office of Chartered Accountants, there was a Cross Church… where it was written: ‘Jesus Christ never fails’, so someone who was doing his CA exam had gone and written, ‘Ask him to write the CA Exam’.”

“In the 80s and 90s the most prestigious jobs were to join the Civil Service or become a doctor. Engineering was the next best thing and those who did not make it to those three esteemed positions became accountants. We are now witnessing a drift of the brightest minds aspiring to become accountants because they see it as their passport into international business,” says Mathew.

Currently, one million students are studying in India to take the ICAI to become a Chartered Accountant, but only about 11,000 of the 400,000 final students will actually become successful.

Despite these unfavourable odds, James survived the gruelling exam and then immediately immigrated to the UAE. Twenty-one years ago, in 1992, he arrived in Dubai and joined the accounting firm Mahendra Asher & Company.

Joining Crowe Horwath
After five years there, he left to become a partner with Crowe Horwath. And for good reason – he is quite proud of Crowe Horwath: “Today we have 14 offices in the UAE serving over 2500 clients here and have employed 200 plus professionals. Crowe Horwath is an International network with 650 offices worldwide and currently ranked 9th largest accounting firm in the world.”

According to the UAE Embassy of India, in the 1970s and 80s, the vast majority of Indian immigrants in the UAE were blue collar and only a fraction of a per cent held professional jobs.

That changed in the early 90s, around the time James arrived in Dubai, and now that percentage is between 15 and 20%. Considering Indians comprise close to half of the total workforce in the UAE, one can expect to see many in companies and firms as CFOs and accountants.

The changing market
Before the global financial crisis, finding a job was easier for just about everyone, accountants included. But now securing a job is difficult, especially for immigrating workers.

“The year 2008 was an employee’s market, now it is an employer’s market… Now one job posting gets you so many CVs…For one single job posting I put out, I receive about 650 CVs in response,” he says, with a look of concern in his face.

Despite these daunting figures, he is confident that the fate of the Indian Chartered Accountant in the Middle East is ensured; “I think Indians are the largest community of CFOs in the Middle East, and that this will continue. UAE’s biggest trading partner is India. Companies will continue to book Indians as their CFO and as the market evolves the Indian CFO is becoming more sophisticated in the GCC.”

Career in private practice
Mathew is aware there are barriers to overcome when hiring an Indian Chartered Accountant and he relates that the ICAI is taking measures to assist students. For example, they have recently added a course called ‘General Management and Communication Skills’ to help prepare students for managing at the Board level and to position them to develop as strategic partners with the CEO and Chairman.

The demand is impressive as the Institution is experiencing one of its fastest growth rates of all time; between the two chapters in the UAE, there are 4,500 Chartered Accountants, 50% of which are registered members.

Even though the economic climate has changed, the work has never been light or easy, especially as a Partner at Crowe Horwath firm.

Mathew details his career in private practice: “I started my practice in 1997 when I joined this firm, and ever since I work about 14 hours a day… I could have been sitting comfortably working seven or eight hours, but one of the driving factors is the extra work. I work six days a week, but the 6th day is a little lighter. We have clients who come in on a Friday from the West so you have to work on that day. Invariably… you have to take this on.”

What it means to be a CFO
What differentiates an accountant who breaks away from the herd to become a strategic leader and critical value creator for the organisation?

When asked about the difference between a Controller and a CFO, Mathew mentions actions such as spearheading mergers and acquisitions transactions, leading initial public offerings, recommending and implementing divestments, allocating resources in the right areas, and changing the capital structure.

“These all require initiative on behalf of the CFO. However, companies in the Middle East have a different modus operandi in comparison to their western counterparts,” he observes.

“First, it is a tax-free jurisdiction so not many of the registered onshore companies keep their books to international standards. Second, the Middle Eastern businessman is adverse to debt relative to other geographies so few companies are strategically manipulating their balance sheets to create value; tax free geographies just make debt less attractive.”

“Third, there is very little M&A activity and almost no IPO activity in the market, so the Controller who wants to make the jump to become a CFO has to have an unusual amount of gumption in the GCC.”

“They have to be self-driven and be focused on developing themselves because their companies and the market won’t necessarily do that for them,” says Mathew. 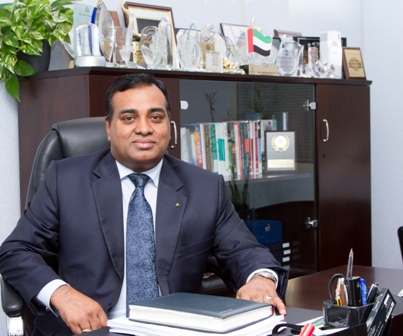 CHANGING PERCEPTIONS:
“We are now witnessing a drift of the brightest minds aspiring to become accountants because they see it as their passport into international business.”

Mathew mentions the role of Chartered Accountants has in the recent years changed in many ways than one, due to the increasing expectations of clients.

Audits, for example, are on the rise, he says. The accountant also estimates that, “Out of around 300,000 registered companies across the UAE, [not including the Free Zones], not more than 60% of the companies maintain proper books of accounts. A lot of companies don’t bother getting audited unless you are getting bank finance. As the Chartered Accountancy profession [goes up] you will see more and more people getting their books audited.”

He urges more UAE Nationals with accounting backgrounds to come into this profession as out of only 800 auditors licensed by the Ministry of Economy, only about 35% are Nationals. There are discussions in the region of setting up a UAE body of Professional Accountants, an effort which will possibly be assisted by the Indian Chartered Accountants.

When asked about the future of the Indian Chartered Accountant, Mathew says, “You will see them become very close to the Board. I think this is beyond just number crunching… we are now supporting the Board in their decisions. I think a much larger role is expected from Accountants.”

“Finance is an integral part of running a business. As the Middle East continues to compete on the global stage, Boards are demanding strategic value creation from their finance team. This has to happen if they are going to be competitive. So there is a clear change in demand on the skill set and in reaction a new cadre of CFO emerging from the GCC.”

Standing in good stead
The basic values of life were his early lessons that he still cherishes and after almost 21 years in practice as a Chartered Accountant, he considers these values will always stand you in good stead;

These principles steered him to the road he is on right now and hopefully, it only goes uphill.