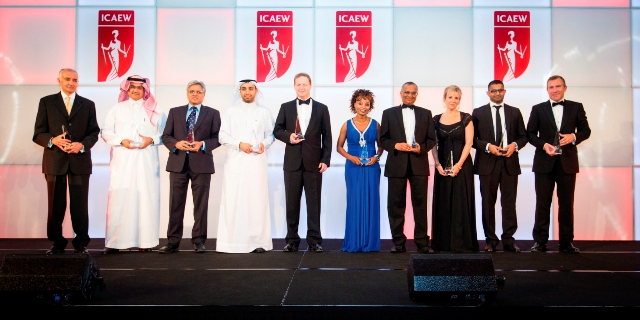 The region’s best talent in accountancy and finance were celebrated last night at the third annual Middle East Accountancy & Finance Excellence Awards. The ceremony was held at the Ritz Carlton in Abu Dhabi under the patronage of H.E. Sheikh Nahyan bin Mubarak al Nahyan, Minister of Culture, Youth and Community Development for UAE.

Organised by ICAEW (the Institute of Chartered Accountants in England & Wales) and sponsored by the National Bank of Abu Dhabi (NBAD) and PIC Group, the awards recognise the best and brightest in accountancy, finance and business.

Commenting on the awards, Peter Beynon, ICAEW Regional Director Middle East, said, “A strong accountancy and finance profession is the backbone of sustainable economic growth. Recognising the region’s best talent – the finance professionals who are daily delivering confidence in business – is important, because their hard work and dedication can often be overlooked. The fact that they are demonstrating the highest professional and ethical standards is what underpins economic growth and we are delighted to give them the credit they deserve.

“This year’s awards programme grew significantly in terms of the level of participation and the quality of submissions. The exemplary performance of the 2013 winners offers a demonstration of the very best practices that the whole profession can emulate.” 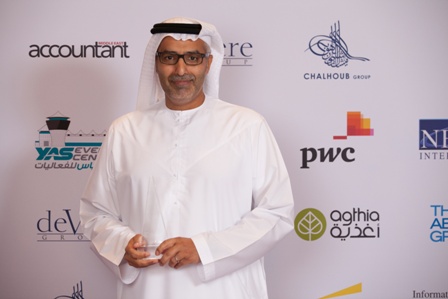 Among the winners of the 2013 awards were: H.E. Riyad Abdul Rahman Al Mubarak, Chairman of Abu Dhabi Accountability Authority for his Outstanding Contribution to the Accountancy Profession; James Rigney from Etihad Airways for CFO of the Year; and Amanda Line, from PwC Academy Middle East for ICAEW Chartered Accountant of the Year. Abdullatif Al Mahmood from Ernst & Young Bahrain was recognised as Young Accountant of the Year.

The new award categories, which ICAEW says demonstrate commitment to the development of local finance and accountancy infrastructure, went to TAQA for Excellence in the Development of the Country’s Future Leaders; Etihad Mobily for Internal Audit Excellence; and GASCO for Accounting for Sustainability.

Dr Abdul Karim Al Zarouni, Senior Vice President and Deputy General Manager-Group Finance of NBAD, Platinum sponsor, said, “With the shift in global trade patterns highlighting the importance of the Middle East as a finance and logistics hub, demand for accounting and finance services will continue to grow. We congratulate all the 2013 winners and would like to thank you for your contribution to advancing the regional economies.”

Steve Rigby, Divisional Manager of PIC-Group Western Asia & India, Gold sponsor, added, “The Middle East Accountancy & Finance Excellence Awards offers a fantastic platform through which regional progress within the profession can be showcased to business and government leaders, locally and internationally. We would like to thank ICAEW for this initiative as it helps reinforce the attractiveness of Middle East markets for foreign direct investments.”