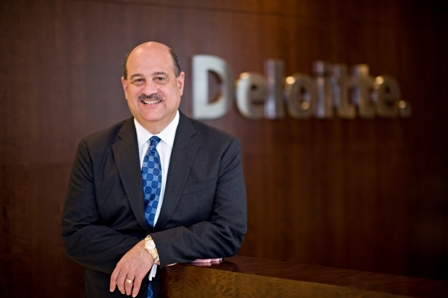 When not running one of the ‘Big Four’ professional service firms in the world, Salzberg sits as Chairman of the Board of the non-profit volunteer organisation – United Way Worldwide – and he also holds the same position at College Summit, a non-profit entity geared towards helping underprivileged students become college-bound.

So how did a working-class kid from a poor borough of New York City rise to become the leader of a multi-billion dollar worldwide company?

In an exclusive interview with Accountant Middle East, Salzberg gives us an insight into his background, his rapid ascension of the corporate ladder, and offers sound advice for anyone who wishes to do the same.

Blue-collar beginnings
Born into a large, working-class family in Brooklyn, Barry Salzberg grew up in the dense, diverse environment that New York City furnishes. His parents both worked as clerks, and he and his older sister were the first in his family to go to university.

Like many young people, Salzberg did not know exactly what his long-term career path would be; he even considered becoming a math teacher since that was his best subject in school. It was already halfway through his undergraduate studies when he decided to declare his major in accounting.

After graduating, Salzberg was hired in 1977 at Haskins & Sells (later incorporated into Deloitte) in Manhattan where he immediately felt like he’d “entered another world.” In this new and busy atmosphere he experienced what he calls “a real culture shock.” He describes that office as a “fancy formal place. So formal you’d get a mild reprimand if you were caught in the hallway without your jacket on.”

At first, it was almost too much for him, and he knew most people in the firm saw him as a young man likely to leave soon. This was a belief he also held, but for only a brief time. While his childhood in rough Brooklyn may not have given him the polish and schmoozing skills needed in upscale Manhattan, it did instill within him an invaluable trait that he continues to use: the ability to adapt. He cites his upbringing as one of the primary reasons he is so flexible in changing situations and new environments.

Embracing change
“I adapted so well that even when I had an attractive offer to leave the US member firm when I was on the cusp of becoming partner, I turned it down. I knew that Deloitte, with its size, scope, and culture, offered me unique opportunities to work with a diverse mix of great people and continuously learn and progress my career. And it was the right choice.”

This skill has served Salzberg over the years and in a surprisingly short amount of time – eight years – Salzberg rose from being a Certified Public Accountant fresh out of university to becoming a partner at Deloitte. From there he quickly ascended the corporate ladder to senior leadership roles.

When asked how he managed to advance so quickly through the ranks, Salzberg first credits his major supporter, his wife, Evelyn: “From the very beginning, [she] inspired me to dream big, rather than simply take a job that was comfortable. She said, ‘You’re smart and you can do more with your career.’ And she was right.”

He outlines some strategies that he says can work for anyone wanting to move up in a company, regardless of his or her industry:
“First, make sure you’re always thinking about what’s right and never lose sight of your morals and ethics in your work. They should be the foundation of every decision you make. Second, don’t be afraid to voice your opinion. Everyone can lead, regardless of position. You shouldn’t wait for an invitation. People take notice of those who are willing to step up, and this is one of the things I look for in a strong leader. Third and finally, hard work and determination can take you a long way.”

Pertaining to his second point, Salzberg stresses the importance of making a name for yourself, for creating a brand: “You can’t advance if people don’t know who you are and how you add value. It’s critical to establish yourself as a specialist in a certain area, to become known for something.”

The power of mentors
No man is an island, nor should he even try to be one. Salzberg recognises his early mentors for giving him the advice and guidance he needed to get his start. Halfway through his thirty-four year (and counting) career at Deloitte, Salzberg was heading the Tax department and bringing in the highest ratings each year. Instead of letting him rest on his laurels, Salzberg’s mentor, Bill Parrett, a former DTTL Global CEO, caught him one day and told him he needed to challenge himself for greater things.

Salzberg recalls; “He saw real leadership potential in me, but to reach that new level he said I needed to broaden my experience. Bill gave me much more than just the push I needed, he demonstrated something priceless—faith in me.”

This career-changing incident never left Salzberg’s mind and he continues to underscore the value of mentors and of mentoring in both his company and in his philanthropic work today. He says a mentor “is many things: a trusted ally, a sympathetic ear, an advisor, and sometimes an advocate” and the mentoring process is “the invisible glue of our culture, and it explains why I’ve always put a lot of energy into mentoring—even now as Global CEO. Both as a mentor and a mentee, these relationships have been among the most rewarding of my career.”

Specific advice for a good company

STANDING OUT: “People take notice of those who are willing to step up, and this is one of the things I look for in a strong leader.”

When making decisions within his business or anything in his life, Barry Salzberg looks at the big picture first, the global view. Reflecting this large-scope perspective, he emphasises the importance of not becoming “siloed” in one department or another, but rather in cultivating “the ability to think across businesses and to be business-savvy broadly.”

He says that to be successful in a service industry, a person must acknowledge that good people skills are mandatory. In his own words; “It’s very important when you are in a people business, as we are, that your values are very much aligned with a people business.”

When asked at a recent university panel what excellent client service consists of, Salzberg quickly named four qualities: responsiveness, industry knowledge, understanding and perspective of the client’s business activity, and having the right team.

He noted the primary focus should be responsiveness, as it ranks at the very top of client surveys as the most important differentiating factor in service providers.

Salzberg said, “Being responsive, (not just answering the phone when client calls) means being proactive, thinking about [the client’s] business, anticipating their needs, and getting out in front of it before they ask.”

Of industry knowledge, Salzberg says an employee needs to understand the industry the client is in and share with them benchmarks and best practices.

On his third point, having an understanding and perspective of the client’s business activity, he explains this as taking into consideration the client’s operational needs and internal organisational needs. Finally, Salzberg stresses the importance of having the right team, meaning that the best client service providers are the ones who have experts in specific areas and who, upon spotting a new need, will find someone to directly address that demand.

Embracing diversity
For the up-and-coming executive in any industry, the Executive offers this advice;
“I’ve joked that when I started at Haskins & Sells as a CPA, I was so green that I was ‘more likely to be making copies than making partner.’ But by my second year, I found my stride and started to rise through the ranks. My passion for my work and my dedication to my clients paid off.”

Salzberg’s advice for ambitious executives centres around his main tenets of embracing diversity, adapting to change and new environments, and championing new ways of thinking. He states that one must “encourage innovation and creative thinking. Consider what you can do to foster a culture where it’s acceptable to try something new and fail, because thinking big and thinking outside the box will eventually pay off.”

Leading a team efficiently and effectively is key to a successful company and career. Salzberg once again highlights the strength of mentors as well as good leadership skills:

“Make sure you’re investing in and developing your people. Never solve a problem for someone on your team or project. Instead help them assess, analyse, and come to a solution on their own. Provide insights and observations, and prompt them by asking questions rather than giving them the answer. This is my approach to mentoring, and to projects presented to me for final approval that don’t meet my standards.”

Standing out from the crowd and making yourself invaluable to the company presents a challenge to new employees, but it is not something that should be disregarded. Salzberg directly declares that “it’s important to brand yourself. Make sure people know who you are. Be honest. Don’t be who you think people want you to be. Be yourself. Be unique.”

The crucial five ‘Ps’
His next piece of advice rings true especially in light of the recent global economic crisis, and that is one of preparedness.
He says, “Always be prepared. It sounds simple, but it really pays off. I attended a training programme early in my career at Deloitte, and the partner teaching the class told us about the five P’s: Proper planning prevents poor performance. I guide my leadership style by the five P’s. You have to be prepared.”

Finally, as his last edict for success, Salzberg ties many of his ideas together in describing the significance of becoming a knowledgeable and flexible leader in your field:

“Push yourself out of your comfort zone. Leaders can take multiple paths. The more experienced you are, and the more diverse experiences you’ve had, the better off you will be in terms of leadership roles. It’s okay to be uncomfortable. Don’t resist change. Don’t resist a different role or a different way of looking at things.”