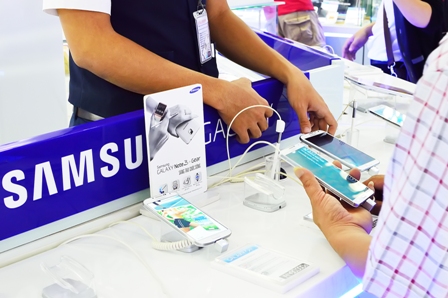 THE TOP global technology, media, and telecom trends for 2014 include 50 million homes doubling up on pay-television (TV); the global value of premium sports video rights increasing 14 per cent led by North American sports leagues and European football (soccer); according to Deloitte’s 13th edition of the Global TMT Predictions just released.

In addition, the report predicts that phablets — an oversized smartphone that’s part cell phone, part tablet — will outsell tablets by $25 billon and the total global sales of smartphones, tablets, PCs, TV sets, and gaming consoles will exceed $750 billion in 2014 and then plateau as consumer usage will continue to converge.

“Our report details many watched and often contended trends in the industry”, said Santino Saguto, partner in charge for the Telecommunications, Media and Technology (TMT) industry at Deloitte Middle East.

“Smartphones, the largest component in the converged living room group ($375 billion revenue in 2014), are nearing saturation among most age groups except the 55+ demographic, which will experience a steep rise in usage this year.”

In 2014, mobile instant messaging services (IMS) will generate about 70 per cent of all messages sent from mobile phones, but only about three per cent of the value. Every day, 70 billion messages will be sent via mobile, of which only 21 billion will be via short messaging service (SMS), but text message revenues are projected at about $100 billion this year, compared to just $2 billion for mobile IM services. Globally volumes of mobile IMS and text messages will grow, even though some developed markets may see falling SMS volumes.

Additionally, while 2014 will be the year of the baby boomer, the group also comes with its own set of challenges and opportunities.

“Getting baby-boomers to engage all functions of their smartphones and not just use it as a feature phone represents a great opportunity for carriers. They need to be up for this challenge though, since we expect that a quarter of these smartphone owners may not download a single app,” Saguto added.

The report also looks well beyond 2014 and predicts a “perfect storm” of conditions that could make Massive Open Online Courses (MOOCs) a major factor by 2020, representing over 10 per cent of all courses taken in tertiary and enterprise continuing education. New technology, alternative modes of teaching and a need to continuously update quickly obsolete skills are driving the trend, suggesting MOOCs will grow enormously over the longer term, even if disruption is minimal in 2014.

Additional highlights and details of this year’s TMT predictions to impact the marketplace in 2014 include:

The $750 billion converged living room: a plateau approaches- Global sales of  smartphones, tablets, PCs, TV sets and videogame consoles will exceed $750 billion in 2014, up $50 billion from 2013 and almost double the 2007 total. However a plateau appears likely: sales are expected to continue growing, but at a slower rate than over the past 10 years, with an estimated ceiling of about $800 billion per year.

Massive Open Online Courses (MOOCs): not a disruption zone yet, but the future is bright- Student registrations in MOOCs will be up 100 per cent compared to 2012 to over 10 million courses, but the low completion rates mean that less than 0.2 per cent of all courses completed in 2014 will be MOOCs. The growing awareness of online education will force educational institutions to increase investment in this area, drive more acceptance of online education as it becomes accredited, and increase adoption by corporate training groups.

Doubling up on pay: TV- By the end 2014 up to 50 million homes around the world will have two or more separate pay-television subscriptions, with the additional subscriptions generating about $5 billion in revenues. A further 10 million homes will receive premium programming as part of their subscription to another service, such as broadband.

Broadcast sports rights: premium plus – The value of premium sports broadcast rights will increase to $24.2 billion, a 14 percent rise on 2013, equivalent to an additional $2.9 billion. This increase in rights fees will be driven by new agreements with certain top tier European domestic football (soccer) leagues and major North American sports leagues.

Phablets are not a phad – Shipments of phablets, smartphones with 5.0-6.9 inch screens, will represent a quarter of smartphones sold, or 300 million units. That is double the 2013 volume, and 10 times 2012 sales. But after initial rapid consumer success, 2014 may mark a ‘peak phablet’ year, as only a (sizeable) minority of smartphones users will want to handle such a large device.

The smartphone generation gap: Over 55? There’s no app for that- Over-55s will be the age group experiencing the fastest year-on-year rises in smartphone penetration across developed markets. Ownership should rise to between 45 to 50 percent by year-end, lower than the approximately 70 percent penetration rate for 18-54 year olds, but a 25 percent increase from 2013.