PwC shines as the tax, assurance and advisory services company runs away with ‘Firm of the Year’ and for the second year in a row, ‘Deal of The Year’ gongs 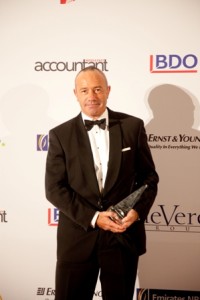 TRIUMPH:
Ian Schneider, a senior Partner at PwC poses with the award after the firm won the ‘Corporate Finance Deal of the Year’ gong at the ICAEW awards event.

PRICEWATERHOUSECOOPERS (PWC) had a consistent presence in the Middle East for over 40 years, a period coincidentally aligned with the life of the UAE.

This history of success is explicable. At the ICAEW awards ceremony, PwC emerged as double winner, having been crowned ‘Firm of the Year’ and, for the second year running, received the ‘Corporate Finance Deal of the Year’ gong.

In an interview with Accountant Middle East, top Partners at the firm said that winning both of these awards mean a lot, even for the global firm that regularly wins a diverse array of awards.

“The Middle East region has a global strategic importance for such a firm, whose presence stretches from Libya in the west, to Iraq in the east, Lebanon in the north and Kingdom of Saudi Arabia in the south,” said Ian Schneider, a senior Partner at PwC.
“This has been cemented by the strategic alliance of the Middle East firm with the UK firm which has facilitated more investment and growth,” he added.

Getting it right
According to Schneider, the award of ‘Firm of the Year’ is “recognition for what PwC is doing regionally to get it right.”

“PwC has grown its operations across the region, both from a people perspective and financial results. In addition, it has been about ‘doing the right thing’. Good examples of this include; that members of staff in Libya were paid throughout the period of turmoil in the country, which resulted in many other businesses closing and withdrawing,” said Schneider, adding that “Maintaining a presence [in Libya] allowed PwC to hit the ground running as soon as business restarted.”

“Another was the way in which staff from Egypt were utilised on assignments throughout the wider region, at the time of the turmoil there. In many areas of the multi faceted professional services firm, the ability to bring in specialists and specific expertise, from wherever in the PwC organisation it happens to reside, allows the business to continue to grow and develop, and to meet the needs of the local business community,” the official said.

That team now comprises 17 professionals from very diverse backgrounds and includes people from the UK, Australia, Qatar, the UAE, Jordan, Egypt and Lebanon.

“[The team] has been delighted, in only its second year, to be, in conjunction with the management team of Dubai DryDocks, the recipient of the award for ‘Corporate Finance Deal of the Year.’ As noted, PwC has now won the award every time it has been awarded and so the pressure is already on for next year,” Schneider said.

A key feature of the DryDocks deal was the close working relationship between the Group, its legal advisors (Clifford Chance LLP) and the management team. Schneider says there was also a very good, and strong, working relationship with the lender group, led by Ian McMillan of HSBC.

“As experienced restructuring professionals, PwC and Clifford Chance were able to bridge the gap, that always exists, between the lenders and the borrower,” Schneider said.

New and untested decree
As far back as February 2011, the group sought to consider the contingency plan of using the new and untested Dubai Decree 57, a procedure to implement a consensual restructuring solution. The DDW debt arrangements, in common with many done in the period 2004 to 2008 required 100%, by both number and value, of the lenders to agree to any changes to the debt arrangements.

“This sort of arrangement, unfortunately, gives the ability for a holder of debt to try and extract hostage value to boost their own financial return, even if this is contrary to the interests of everyone else. In the more developed restructuring markets, processes have been developed to prevent this as is the case in the USA (under Chapter 11) and the UK (under Schemes of Arrangement or the Company Voluntary Arrangement provisions) and other English law jurisdictions.”

PwC, which has the largest and oldest restructuring practice globally, has been at the forefront of the implementation of new legal developments in reform. The firm did the first cases under the new European Insolvency regulations and has implemented some of the more difficult Schemes of Arrangement (for instance, Re Bluebrook). As such, DryDocks turned to PwC to help with the aspect of contingency planning to use Decree 57 if all of the lenders wouldn’t agree, which was a very high practical reality.

Plan with sufficient flexibility
After having completed this phase of work the PwC team were asked to help DryDocks, as their full blown financial advisor, in their discussions with their lenders. According to Schneider, the PwC team were able to draw on their experience of other situations to develop a structure, and then a proposal, that worked for all.

“This solution gained wide lender support at the meetings that DDW organised with its lenders. However, it was still clear that some of the funds would not agree to the deal and would look to secure a super return. Accordingly the DryDocks management and leadership team took the brave step of being prepared to use Decree 57,” he says. The filing was made on April 1, 2012 and the process got underway.

“Everything went to plan with one exception, caused by commercial matters within the business, but the plan had been designed with sufficient flexibility to manage such matters.”

Classic restructuring role
At the beginning of July, the relevant meetings of the impacted creditors (which were just the providers of debt finance – there was no impact on customers, suppliers or employees) and shareholders were convened and passed the resolutions to approve the agreed restructuring. The votes were comprehensively in favour with everyone who voted supporting the plan and only two creditors not voting – effectively 97% of the creditors said “yes please”.

The Tribunal approved the restructuring at the end of August and the various conditions precedent were discharged by October 31, 2012 and the deal came into place. PwC’s role ended that day and matters are now in the hands of management to deliver their business plan and comply with their loan agreements.

“It was a classic restructuring role for a world leader like PwC – supporting the client to achieve their objectives by using their experience, but delivering a great ‘PwC Experience’ for the client,” Schneider proudly says.