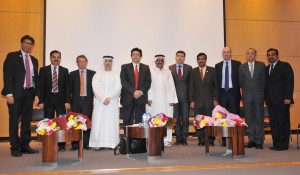 Heads of major audit associations and accounting professional bodies in the UAE at the event where they launched a new joint task force.

THE HEADS and regional directors of seven major audit associations and accounting professional bodies have unanimously agreed to launch a joint action task force that will help in fostering better relationships.

At a first-of-its-kind meeting comprising of accounting and audit associations of the UAE, the bodies resolved unanimously to set up a task force – a joint working group – that would meet on a regular basis to discuss critical issues affecting their members which include UAE nationals and expats from as far afield as UK, India, Pakistan and nationals from around the Middle East, all of which together add up to several thousand members in total.

Abbas Ali Mirza, the Chairman of Auditors Group of the Dubai Chamber, was elected unanimously at this historic meeting of the seven major accounting and audit associations to spearhead this joint initiative and serve as the convenor of this joint action task force.

Saif Bin Abed Al Muhairi, the Chairman of the UAE Accountants and Auditors Association (AAA), stated; “I am extremely delighted that this joint working group has been formed. There are a number of issues that were discussed and this joint task force agreed to take upon itself to tackle them expeditiously.”

“We are very hopeful that this new working group can easily take upon itself, among several important issues, key tasks such as assisting the local authorities in the UAE to set up the much-awaited Institute of Chartered Accountants of the UAE, which I am certain, will be a welcome move and will be well received by all,” he added.

“The UAE’s AAA is very supportive of the formation of this joint action task force and we are extremely glad that this timely joint initiative on part of associations and accounting bodies based in UAE is a welcome move,” Al Muhairi said.

S. Venkatesh, the immediate former Chairman of the Institute of Chartered Accountants of India, Dubai chapter, said; “We expect this to be a ‘win-win’ situation for all the associations and accounting bodies that have agreed to be part of this joint working arrangement. There are a number of areas where we hope to co-operate with each other.”

“This is a move in the right direction and I am sure it will greatly facilitate the joint activities of the various accounting bodies. Our institution looks forward to working with the other associations and accounting bodies that are part of this joint initiative,” he added.

Lauding the historic move, Abbas lamented that presently each body or association organises separate events – including technical seminars and major conferences – for its members, however, “there is a real need to coordinate and hold joint meetings for members of all bodies and associations operating in the country.”

“The launch of a joint working group is expected to provide a common platform for tackling important matters of common interest that are critical for several thousand members of all audit associations and accounting bodies operating in the UAE,” he added.

For the first time in the country, with the formation of this joint working group and task force, joint programmes for UAE nationals and expats from various countries, would take place under the auspices of the joint task force.

“These professionals undertake specialised assignments and need to keep abreast with latest changes in law and standards and thus there is an urgent need to provide them with a common platform wherein they are able to rub shoulders with other professionals,” Abbas said.