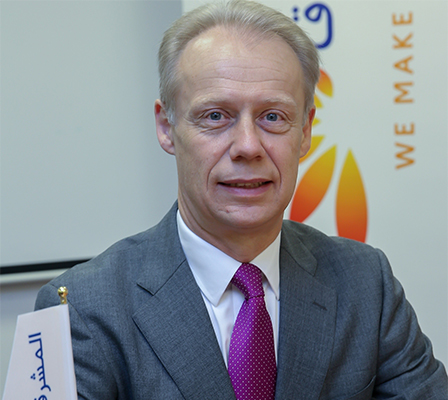 Mashreq has announced the appointment of Jan-Willem Sudmann as its new Head of International Banking Group.

With more than 23 years of commercial and investment banking experience, Sudmann will be responsible for the Bank’s overseas business and his appointment marks a key initiative by the bank to strengthen its top management team.

“Mashreq is a financial institution that has cemented its reputation as an innovator in the Middle East banking industry and I am pleased to be joining the team at such an exciting time for the bank,” said Sudmann. “The corporate banking business has been a cornerstone of Mashreq in the UAE for a very long time and I have been given the opportunity to augment its success by expanding the corporate banking business to a pan-Arab business, with branches in Bahrain, Egypt, Qatar and Kuwait. It’s a very exciting challenge at a significant time in Mashreq’s development.”

Sudmann joins Mashreq from Commerzbank, Shanghai Branch after having served as Managing Director and prior to that he was Managing Director at Commerzbank’s Beijing Branch for four years. He was also the Head of International Products and Financial Institutions at Dresdner Bank AG, Frankfurt.  In the early parts of the last decade he was heading the global relationship management for financial institutions in Asia, Africa, Middle East and Turkey.

Prior to his assignments at Dresdner Bank AG in Frankfurt, he was working in the Global Export and Finance team of Dresdner in London and spent four years as Head of Cairo and Beirut Representatives Offices of Dresdner Bank Group in Egypt in the late 90s.

Sudmann believes his experience with financial institutions will be invaluable to the expansion ambitions of Mashreq’s International Banking Group.

“The financial institution business of Mashreq which rests in the International Banking Group provides expertise for financing and executing trade flows between Asia and Africa, while being uniquely based in the Middle East,” said Sudmann. “With strong growth expectations for trade between Africa and Asia as well as within these continents, we are well positioned to capitalise on this opportunity.”