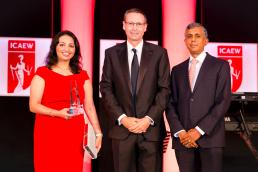 The award recognises an organisation whose annual report and accounts demonstrate clear and balanced content, which is presented in a creative and consistent manner.

The awards ceremony took place at Jumeirah Beach Hotel in Dubai under the patronage of HE Sheikh Nahyan bin Mubarak Al Nahyan, Minister of Culture, Youth and Community Development for UAE. Organised by the Institute of Chartered Accountants in England and Wales, ICAEW, the gala event is the only dedicated awards programme for accountancy and finance professionals in the region.

Commenting on Dunia’s award win, Rajeev Kakar, Managing Director &CEO of Dunia, said: “We are delighted to announce that our annual report and transparency of reportinghas been recognised for such a prestigious award. Here at dunia, we have a passion to excel and strive for excellence in all that we do, upholdingour reputation with pride. We will continue to conduct our business with all stakeholders, customers and regulators with the highest ethical standards and transparency.”