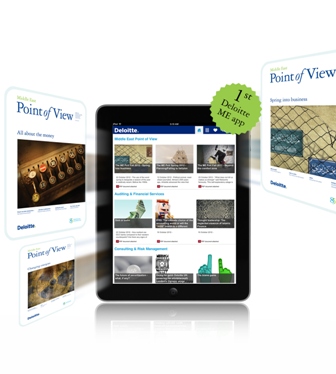 DELOITTE’S MIDDLE East ‘Point of View’,the quarterly thought-leadership publication, has now been launched as an App on the tablet.

This announcement comes timed with the release of the fall issue of the magazine, that tackles several issues: from the Arab Spring impacts on markets, to the developments in Libya, the challenges facing capital efficiency in the GCC and many more topics for business leaders in the Middle East.

“Given the importance of communication nowadays, Apps on smartphones and tablets are becoming the norm for individuals who want to manage what they want to read of the latest developments in their areas of interest. We launched the ‘Middle East Point of View’ App for leaders in the Middle East region who are interested in accessing the viewpoints from experts on current hot topics in the MENA region,” said Rana Ghandour Salhab, talent and communications partner at Deloitte Middle East.