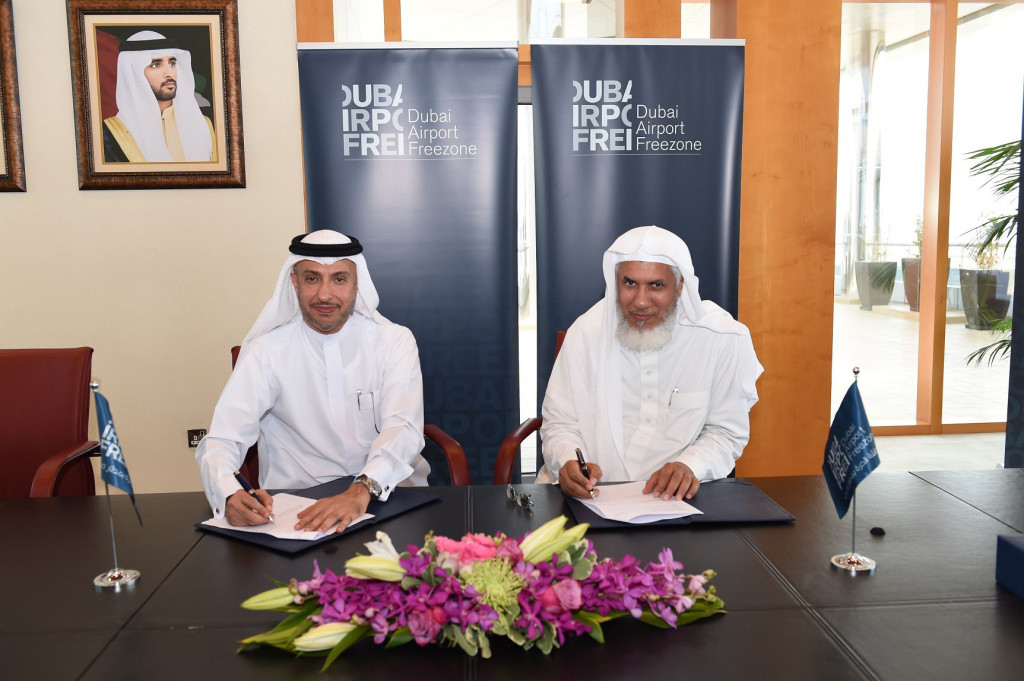 As part of its commitment to drive the development of the national economy, the Dubai Airport Freezone Authority (DAFZA) recently signed a strategic Memorandum of Understanding (MoU) with the International Centre of Islamic Economy.

The agreement aims to strengthen their mutual cooperation and make valuable contributions in support of the initiative launched by H.H. Sheikh Mohammed bin Rashid Al Maktoum, UAE Vice President and Prime Minister and Ruler of Dubai, to make Dubai a capital of the global Islamic economy.

The partnership was signed at DAFZA by H.E. Dr. Mohammed Al Zarooni, Director General of DAFZA, and His Eminence, Dr. Abdulrahman Bin Saleh Al-Atram, President of the International Centre of Islamic Economy FZE and Secretary General of the International Islamic Foundation for Economics and Finance (IIFEF), in the presence of senior officials and managers from both sides. It highlights the strategic importance as it primarily focuses on choosing Dubai, and DAFZA in particular, to be the headquarters of the International Centre of Islamic Economy. The move aims to increase joint efforts to develop and promote products and services of the Islamic economy and to help in the development of the international Islamic economy. It is also intended to increase the contribution of the Islamic economy to Dubai’s overall GDP and reflect the ambitious objectives of the ‘Dubai the Capital of Islamic Economy’ initiative. Through the cooperative agreement DAFZA hopes to attract businesses that operate in adherence to Shariah principles.

Dr. Mohammed Al Zarooni expressed his delight at the new strategic partnership which sets the headquarters of the International Centre for Islamic Economy at DAFZA which is itself taking proactive steps in contributing to the diversification of the economic base. The move is very important as it will partly define the prospective role the centre will play in promoting the concept of Islamic economics and developing its applications globally by encouraging research and scientific and jurisprudential reports and stimulating creativity and innovation in the development of Shariah-compliant products and services, reflecting Dubai’s vision to become the capital of the global Islamic economy.

“The new partnership confirms our eagerness to enhance the achievements made by Dubai to become a global leader in the Islamic economy. Together we shall build solid ties with the public and private sectors to ensure that the necessary means to deliver Islamic financial, commodity and service products with the highest standards of excellence and quality are provided. We are committed to effectively developing sectors under the Islamic economy and attract foreign investment within DAFZA which is now one of the most developed free zones in the world,” said Al Zarooni.

His Eminence Dr. Abdulrahman Bin Saleh Al-Atram appreciated DAFZA’s contribution to promoting the local economy by creating a favourable environment for business and an attractive destination for international and regional investors. He emphasised the importance of the new strategic partnership in supporting Dubai’s transformation into the capital of the global Islamic economy by focusing on developing product and services compatible with the provisions of Islamic Shariah.