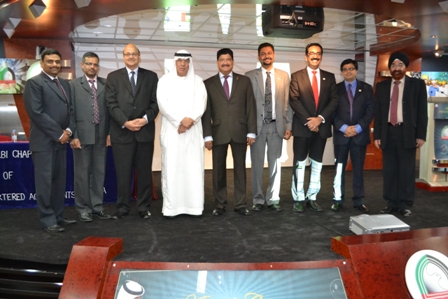 Committee members of the Abu Dhabi Chapter of the Institute of Chartered Accountants of India pose for a photo after the Chapter hosted dignitaries to an Iftar dinner during the holy monthly of Ramadan.

INDIAN RESIDENTS residing in the UAE “have been fortunate enough to get an 11% increment in their monies without much effort, due to freefall of the Indian rupee,” CA Padmanabha Acharya, the Chairman of the Abu Dhabi Chapter of the Institute of Chartered Accountants of India, has said.

Acharya was addressing dignitaries at an Iftar dinner organised by the Chapter, during the holy month of Ramadan. The seminar was also addressed by CA Sudhir Shetty, the Chief Operating Officer – Global Operations of UAE Exchange, one of the leading exchange houses in the UAE.

Inaugurating the seminar, Acharya stated that while the currency’s plunge spells good fortunes for Indians in the UAE, in India, the freefall could result in increased cost of imports, fuels and gold leading to inflation.

CA Shetty enlightened the audience about the sea-sawing of the rupee, by explaining the history of the fluctuation. He said in 1991, the currency was devalued twice by the then Finance Minister Manmohan Singh (present Prime Minister of India) to revive Indian economy.

Giving an update on recent developments of the Indian economy, CA Shetty added that global investors are not feeling comfortable in India, with top firms such as POSCO announcing its withdrawal from Karnataka State, Arcelor Mittal from Orissa State, and Warren Buffet’s controlled Berkshire Hathaway is reconsidering earlier plans to open its insurance arm in India.

“On top of it, the lack of clarity in foreign investment policy and political instability are the major reasons for the rupee to further depreciate,” he said.

“Looking at the future, we’re anticipating that uncertainty in the central government election will remain one of the major reasons that the rupee will not strengthen any time soon. This is a long term call and corrective actions over a long term may have positive impact.”

“Whether the rupee will further depreciate is anyone’s guess. However, it appears that it will remain under pressure for some time,” he added.

The Abu Dhabi Chapter of ICAI is actively involved in enhancing and updating the professional knowledge of its members through organising seminars under the Continuing Professional Education programmes of the Institute. ICAI is the second largest accounting body in the world. Among the overseas Chapters, the Abu Dhabi Institute is one of the most active, with 29 years of history in the UAE and with more than 600 members continuously serving to the UAE.