They are young dynamic, full of ideas and mean business. They’ve left no stone unturned in taking their respective businesses to new heights – but rest assured, they won’t stop at that! Assistant Editor Rushika Bhatia spoke to these two iconic role model – Paul Kenny and Arya Bolurfrushan – and asked them about their new exciting ‘ventures’… 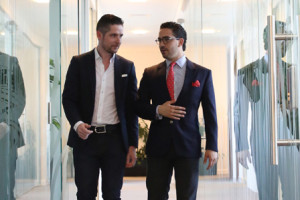 When Paul Kenny, founder and CEO of the famous e-commerce website Cobone.com, and Arya Bolurfrushan, CEO of Bolurfrushan International Group and an angel investor, recently launched a new venture capital firm – Emerge Ventures, they attracted a lot of attention. Emerge Ventures is focused on high-impact early stage investments in Middle Eastern technology companies – with a preference to infrastructural e-commerce. In a candid chat with Accountant ME, the dynamic duo explain further…

How did Emerge Ventures come about? Tell us about your vision for the company

Kenny replies, “After the launch and success of my company Cobone.com, I found myself interacting with a lot of aspiring entrepreneurs that were looking for advice; constantly engaging with them and helping them overcome challenges within their businesses. For instance, many people would approach me for advice on setting up their payment gateway, or marketing their product, and so on. At the same time, Arya would get a lot enquiries about his interest in financing and investing various projects. So, we asked ourselves, why not combine forces and create a platform to provide capital – financial and intellectual – to start-ups in the region? As a result, Emerge Ventures was born.

“It was a natural transition as we found ourselves building connections within the start-up community; also entrepreneurs and investors from outside the region would approach us as they looked to gain access to the Middle East. Simultaneously, we were also making a lot of investments in the region; we had about 25 investments between the two of u

Bolurfrushan adds, “We saw massive growth potential in the MENA technology infrastructure space, with the UAE in particular investing heavily to develop innovation and technological readiness. As economies in our part of the world mature and move higher up the value chain towards the highest calling of man – innovation – we wanted to be a vehicle bringing the smartest global capital to serve as a catalyst in this transformation

Across what regions are you looking to make investments?

Kenny says, “We hope to make investments across the globe – with no specific focus to any particular region. We have currently invested with two businesses based out of the UAE and one that’s San-Francisco based.  So, we are actively looking at different regions.”

Your company has a specific focus on infrastructural e-commerce start-ups. What attracted you to this sector?

“In 2010, when I was working on Cobone.com, there were no Internet companies; there weren’t many people you could approach for guidance and support. The challenges that we faced were immense; for instance, we struggled with hiring. At that time, people would say, “why should we work for an Internet company?” So, the reason we set up Emerge Ventures is to help technology start-ups. We see the significant opportunity not just that B2B or B2C plays but in terms of technology that helps builds companies of the future. For example, the Impact Hub is a launch pad for hundreds of new companies over the coming years and we want to be part of this,” says Kenny.

He adds, “And, what we have learnt is that the technology market across some countries is either more developed or less developed. Technology is very diverse, it could be biotechnology, logistics, robotics, and so on. So our interest will be technology but it will diversify across the different verticals within technology.

“In the initial stages of Emerge Ventures, we knew our focus was technology but when we got into the space of investing, we realised there are significant opportunities across multiple verticals. It’s also worth adding here that Impact Hub is a great example of an investment that we’ve made that isn’t a technology startup. So we are looking at a very diverse portfolio but every investment that we make will have an element of technology.”

Is there also a specific business model that you have developed a bias towards in your several years as an experienced entrepreneur, angel investor and industry-expert?

Kenny replies, “It depends on the stage at which the city or country in question currently is. So what I say today may change tomorrow. I personally feel that having a B2B model gives you a better chance than running with a B2Cmodel. I have personally experienced this with Cobone.com. The reason is because the market is extremely fragmented, there aren’t sufficient support technologies that allow you to scale up quickly. For instance, payments is a big issue in this region, marketing is another major issue .If you take the example of Dubai, there are millions of people using different technologies, there is no one way to reach all the people of Dubai other than a billboard on Sheikh Zayed Road costing millions. But, as an SME, I simply can’t afford that. So, it’s a complex B2C market but there are a lot of opportunities in the B2Bspace.”

What are some key factors that you look for in a start-up before investing? Is there a selection procedure in place or do you prefer referrals

“The three investment deals we’ve had so far were all deals that we sought after. We’ve found that informal conversations are often a good way to come across start-ups that we are interested in. Many times, they might not even approach us for funding; we might just happen to see that they have a great business idea that we want to support. Building a long-term relationship with the businesses we want to work with is also very important to us. For this to happen, the interaction needs a good amount of time like a few months – it’s not something that typically happens over one or two meetings,” explains Kenny.

“Currently, we have about 10-15 pitches coming to us per week which are not just local but regional and international. In terms of their sectors, they are quite diverse.”

Kenny says, “Arya and I have made about 25 investments so far, and many of these are passive – we don’t even speak to them. When you are an angel investor, you are not really taking a seat on the Board or anything along those lines.

“I like to have an open relationship with the entrepreneur and say, “if you want me to be around, I’m more than willing to help”. And, it’s just understanding what your role is in the business – are you an advisor, or on the board? Where do you actually have power? I would personally try and invest in companies that are looking to get some added value and, that I can help with. But, I wouldn’t necessarily interfere; if they have their strategy, they should standby it. Our investment is always the people, not the business.”

Bolurfrushan adds, “One o f the main advantages of having an experienced investor on board is the structure it creates for the entrepreneur. This structure helps the entrepreneur be accountable to themselves in measuring progress.”

There’s a lot of buzz about ‘innovation’. What does this mean to you, and to Emerge Ventures? Is something that you look for when making an investment?

Bolurfrushan says, “As Emerging markets develop, they tend to move up the value chain towards creation and innovation. We would like to help fuel this evolution by believing in aspiring entrepreneurs and providing the resources to help them realise their vision. We invest in people, not companies.”

Emerge Ventures has made its first three investments as part of MENA Fund I. Tell us a little about them. What made them attractive investments

Bolurfrushan says, “We’ve invested in ‘The Impact Hub’, a collaborative incubator and co-working space in Souk al Bahar Dubai;Lumba, a silicon valley based mobile gaming company focused on t he Arabic-speaking world; and Elevision, a new digital media network that broadcasts news, information and advertisements from screens inside the lifts of premier towers in the UAE.”

Kenny explains, “What I like about the ImpactHub, for instance, is the location – it is set in the heart of Downtown Dubai which is a strategic and popular location. It’s quite different from other similar hubs in Dubai because it offers a unique educational and learning experience.”

Kenny explains, “You can think about a potential exit strategy but I’m aware of the fact that this region takes a bit more time. I don’t want to force an exit strategy on any company.”

What is next for Emerge Ventures?

Kenny explains, “Our long-term focus is to partner with people who are looking to build great things. We want to be a part of some of the leading companies of the future. The Impact Hub is a great example – it’s a platform where hundreds of new businesses will be built and we want to a part of this exciting story. We are definitely not looking for entrepreneurs or businesses with a short-term strategy or those that are in the industry for quick-wins.

“We want Emerge Ventures to be seen as a premier destination for smart capital – because we aren’t just giving you financial support, but a lot of sound advice as well. Something that we are looking to do in the near future is to host a ‘Dragon’s Den’ type of an event where entrepreneurs have a couple of minutes to make their pitches, and the winner gets rewarded.”

Do you think being an entrepreneur is perceived as being ‘glamorous’ in this region?

Kenny responds, “I think being an entrepreneur here is surely not glamorous, it’s actually quite hard. You need to put in a lot of effort in building your business and effectively managing all the risks associated with it. You can’t pursue a fulltime job while running a small business on the side – you have to dedicate all your resources in terms of both time and money to be a true entrepreneur. I’ve come across a lot of such entrepreneurs – particularly in this region –and highly respect them.”

Do you have any advice for aspiring entrepreneurs in the region?

“I think it’s the perfect time to start a company here, just remember to have a long-term focus. Also, as an entrepreneur, you will have to face a million roadblocks but it’s imperative to have the ‘never say no’ attitude and find a way to achieve your goals. In terms of raising capital for your business, it’s critical to be persistent – don’t give up easily. Getting finance is definitely going to be a hustle, but, if you continue to interact with the right people, you will surely get there,” concludes Kenny.