Accounting for his life

Having been in the business for over 60 years, BDO Founder and Managing Partner Russi Patel says for him, his career is more than a game of numbers 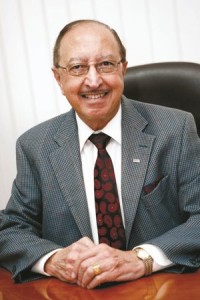 BLAZING THE TRAIL: The UAE firm of BDO International has been the pride and joy of my existence and I have dedicated my entire professional career to its growth and achievements.

IT ALL began in Mumbai, India, where I started my professional career as an accountant during the late 1950s.

In 1962 I moved to Aden, in South Yemen. I kept my practice going in Mumbai at the same time. In the early days, Aden, as a free port, was a key location in the Middle East in terms of trade with neighbouring countries and a number of multinational businessmen, industrialists and bankers had located there to capitalise on this opportunity.

In a short span of time, I had established a name for myself and my firm (Patel & Co) within the business and professional community in Aden. In 1968, political unrest started to boil over in Aden and it soon became a difficult place for certain expatriate businesses which were serviced by Patel & Co. In that volatile situation, a major client of the firm warned of possible reprisals against me and my business.

Part of Trucial States
A quick trip to Northern Yemen was therefore organised by the client to get me out of Aden and so with only my briefcase, I managed to make it out of the country in a very daring escape. As a matter of good fortune, I had already obtained a professional auditor’s licence in Sharjah (then part of the Trucial States) in 1967 and this helped me to decide on my final destination after a quick departure from Aden.

The main incentive for me to start a new life and practice in the Emirate of Sharjah was the presence of some of my former clients in Aden, and the prospects of growth of trade and commerce in the UAE, at the time. Honesty and sincerity combined with determination and sheer hard work were the core of my new practice. There was no working capital but I had resolved to build up the practice anyhow. My office in Sharjah was a one room affair with wind towers for cool air.

Tightly knit community
The following year, I set up an office in Dubai. At the time, Deira was the central location for business, albeit a very small one. Many young businessmen and professionals greeted one another almost everyday as they walked past each other to work. It was indeed a beautiful and tightly knit community where everyone knew each other.

After opening my main office in Dubai, I started a small practice in Hodeidah and Taiz in Northern Yemen and, after a few years, another branch was also opened in Muscat, Sultanate of Oman. The Northern Yemen practice was however, closed down after about 10 years, and very recently I also gave up on my interest in the Oman-based firm.

In 1975, BDO International, a worldwide network of public accounting firms, appointed Patel & Co as its representative in the UAE. Currently BDO is the world’s fifth largest international accounting organisation and I am a member of its Council. As the BDO Liaison Partner for UAE, I am responsible for the coordination of all international client-work in UAE.

My continuous commitment and significant contribution to the development and promotion of BDO’s presence around the world and in the Middle East region led to my being awarded the BDO medal in October 1993. My credentials do not end at this. I am also qualified and licensed to practice public accountancy in the State of Texas, USA.

Many awards and honours have been conferred upon me. The most recent one was the award given to me by Dr Verappa Moily, the Union Minister in the Government of India, on October 02, 2011 during the 30th inaugural function of the Institute of Chartered Accountants of India – Dubai Chapter, in recognition of my services rendered as founder chairman. I also received the Lifetime Achievement Gold Star Award in April 2008, from a prominent NRI Group, in recognition of my services to Humanity and Contribution to the Economic Development of India and the country of my adoption, UAE.

Doing business in UAE
The UAE firm has been the pride and joy of my existence and I have dedicated my entire professional career to its growth and achievements. So when I reflect on the last 44 years of doing business in this country, it gives me great joy to see that the firm that started in a small wind tower in Sharjah with only one member of staff, has now expanded to six offices with eight partners and staff of over 70.