A history etched on clay 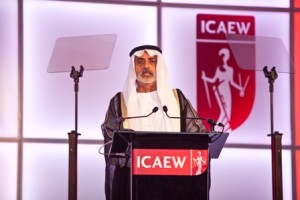 WORDS OF WISDOM:
“The accounting profession owns a history much longer than the UAE’s,” says HE Sheikh Nahayan bin Mubarak Al Nahayan, Minister of Higher Education and Scientific Research.

TODAY’S TECHNO-SAVVY number crunchers utilise the best tools and software that the modern world has to offer. But did you know that the forefathers of accounting relied on clay tokens for double-entry bookkeeping?

In his history-rich speech tinged with humour and wit, HE Sheikh Nahayan bin Mubarak Al Nahayan, the Minister of Higher Education and Scientific Research, enlightened dignitaries – who comprised the cream of the accountancy and finance profession – about the colloquial origins of the modern-day act of debit and credit.

“The accounting profession owns a history much longer than the UAE’s,” he said, during the annual Accountancy and Finance Excellence awards ceremony, organised by the Institute of Chartered Accountants in England and Wales (ICAEW).

“You must be proud that your predecessors gave writing to the world where archaeologists and historians determined from fired clay tokens shaped as spheres, cones and ovoids.”

Debit and credit entries
The tokens furnished a basic method of keeping track of produce and exchanges and centuries later, the advent of large-scale trading enabled a vast increase in the number of tokens representing items such as bread, honey, metal and textiles.

“People began to store their tokens in clay envelopes,” Sheikh Al Nahayan narrated, adding that “tokens added were in effect what we would call debit entries, while tokens removed were credit entries.”

“Eventually the owners of clay envelopes realised that they could account for their tokens by flattening their envelopes and pressing the tokens into wetted clay. They thus created the world’s first tablet and moved from 3-D to 2-D accounting,” the Minister said, to the amusement of the dignitaries.

Sense of responsibility
While emphasising on the important role that accountants play in today’s business world, Sheikh Nahayan sent the crowd rolling with laughter by quoting a famous statement by the ‘King of Rock and Roll’ Elvis Presley.

“He [Elvis Presley] once said that ‘I have no use for bodyguards, but I have very specific use for two highly trained certified public accountants’.”

“Yes, you are an essential part of our society, and, with your moral sense of social responsibility guiding your character, you are invaluable,” Sheikh Nahayan said.

The Minister showered plaudits on ICAEW for the meticulous planning of the awards event, saying with over 138,000 members worldwide, the Institute operates with great authority and understanding in the accountancy field, and “serving people in a field that has recently been too often represented in trust-destroying headlines, ICAEW knows that there is no substitute for excellence.”

“The global economy depends on your accuracy, your clarity, your candor,” he said, adding, “Your challenge to be accountable to society mirrors that of our own UAE. Building a sustainable economy is our top policy priority. Our second priority is a balanced and diversified development that will ensure stability. Those priorities speak to social responsibility. They also raise other issues because, while we increase prosperity and eliminate poverty, we know that our actions must at the same time conserve our environment and preserve our cultural heritage. That cultural heritage has defined our moral principles. We in the UAE must honour them by working for environmental protection, social cohesion, cultural identity and quality of life. We must earn the trust and respect of society and behave in a fair and honest manner.”

The ceremony was attended by leading professionals from across the region and graced by Olympic sporting legend and London Olympics organiser Lord Sebastian Coe, who was the keynote speaker.

The awards were spread over ten categories and celebrated the very best of accountancy and finance from throughout the Middle East, where winners were selected by a judging team of 13 recognised and respected industry experts from accounting, finance and business.

Peter Beynon, ICAEW Regional Director Middle East, said: “It has been excellent to have the chance to recognise and reward the very best of our profession from across the Middle East.

The vital work that finance professionals do throughout the region can sometimes be overlooked but with talented people like these, we can all do business with increasing confidence. The winners should be extremely proud of their achievements.” 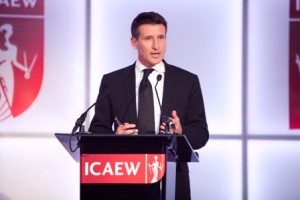 Among the winners were Mohammed Alabbar from Emaar, who was awarded Business Leader of the Year, CFO of the Year Prasanth Manghat from NMC Health and Muhra al Mulla from Deloitte, who was crowned Young Accountant of the Year. PwC won Firm of the Year, while Tamkeen was recognised for Excellence in Training and Development of Finance Professionals.

Surya Subramanian, Group Chief Financial Officer from Platinum sponsor Emirates NBD, said: “The finance profession in the Middle East is growing and becoming stronger every year. We congratulate all the winners for their dedication and on achieving personal excellence whilst also helping ensure prosperity for the region.”

Open to finance professionals across the regional business community, the awards recognise those individuals and organisations who have demonstrated superior excellence in their field – who are the very best in what they do.

ICAEW key milestones
Based in the Dubai Financial Centre (DIFC), the ICAEW Middle East regional office was opened in 2009 and provides support to over 1,400 members and students, and works closely with governments, regulators and key stakeholders.

The association’s recent key milestones include the launch of the ICAEW Emiratisation scholarship scheme to attract local Emiratis into the profession and responding to various consultation papers on proposed changes to financial structures and regulations in the UAE.

ICAEW also assists the Dubai Financial Services Authority (DFSA) with audit quality monitoring, and produces a series of thought leadership and technical events for both members and non members, within the GCC.