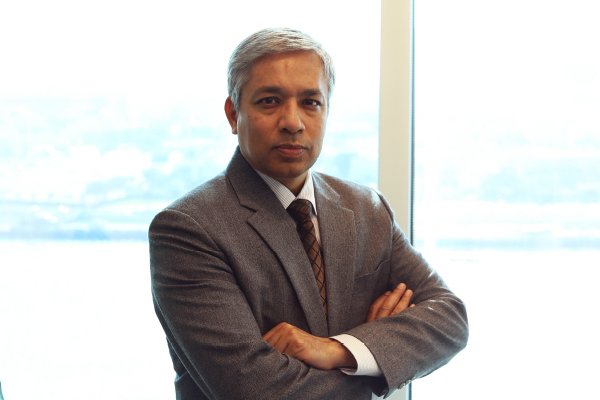 Surya Subramanian isn’t a man who can afford to get his sums wrong. Emirates NBD’s Group Chief Financial Officer talks to CFO ME about his relationship with technology, IT banking threats and the company’s CIO, and how his customers are benefitting from the digital transformation.

Surya Subramanian never lets technology connections impair his plans. “Speaking with my CFO hat on, I can never purchase tech for the sake of tech,” he says. “Return on investment has to be there, but this can come in a number of forms: improved customer experience, market leadership, renewing enhancements or risk mitigation. A project has to tick one or more boxes, and the more it ticks, the faster it will go ahead.”

Four years into the job – and into his stint in Dubai – Subramanian’s role is heavily intertwined with IT. “Broadly speaking, my job is split into two roles,” Subramanian says. “One is in finance, and the other in bank management, which encompasses technology cost and benefits, as well as strategy. Thankfully it’s not a Jekyll and Hyde balancing act.” He also says he is “joined at the hip” with company Chief Information Officer Ali Sajwani. “Ali works within the COO’s enterprise, and is in charge of the IT board,” he says. “He’s in charge of the steering committee process, which considers all projects and change requests, and involves most senior C-suite executives of the organisation. That’s the main forum for presenting technology details and implications. He has a small finance team that reports to me, but we work very closely together.”

This close bond has had a marked impact on the way Subramanian values technology, and a number of cutting edge initiatives that he has overseen have now come to fruition. “As an organisation, we like to see our customers benefit from the digital transformation,” he says. The bank has installed a video teller system in Dubai Mall, and two of Emirates NBD’s other important initiatives were launched in late 2014. Its Direct Remit service allows money to be transferred to certain banks in India and the Philippines in just 60 seconds at no charge, while eIPO allows companies to turn themselves public via an ATM or through online channels. eIPO has been used in “four major” Q4 IPOs, including Emaar Malls’ decision to go public in September last year.

“As the market moves, we always need to bolt on enhancements to our core banking services,” Subramanian says. “As technology evolves, we need a certain common platform to run applications. We believe in technology benefitting our customers.” The company has also “sliced and diced” its IT chain by using disclosure management software to now publish Q4 results by 18th January, when they were previously released around 13th February.

Subramanian names the company’s most used technologies as its corporate board application, email, messaging software, and telecom applications. He says a balance must also be struck between what can be outsourced and what should be built internally. “We take care of elements that give us a competitive edge,” he says. “Things like mobile banking we do ourselves, whereas it doesn’t make financial sense to build an in-house application for core banking. Although our IT architecture is complex, it is no different from a standard bank, but everything does have to be constantly refreshed, replaced and redesigned as we are one of the largest banks in the Middle East.”

The 2007 merger of Emirates Bank International and National Bank of Dubai into Emirates NBD continues to have an impact on the company’s IT. “The history of the merger has meant we are still aligning banking systems,” Subramanian says. “That is just one aspect in which we are engaged in continuous enhancement.”

Perhaps at the top of the list for any modern banking IT arm is the issue of security. Get it wrong, and vast sums of cash, as well as the organisation’s invaluable reputation will be in jeopardy. “We are in a business of trust, and we cannot afford to lose that,” Subramanian says. The IT and finance teams work in tandem to ensure things don’t go awry. “A dedicated team decides the budget for security. We do vast amounts of internal and external penetration testing, and have a multi-layered security apparatus, including self-imposed security. In-house leaks can be dangerous, but we also use other agencies that work with us for external perimeter checks.” Subramanian is bullish about the bank’s IT security as a whole. “The reality is that we haven’t been hit so far – but you can never be sure; you can’t know what you don’t know,” he says.

Subramanian is far from flattered by impostors who involve him in remittance scams. “At the moment there are around half a dozen people impersonating me on LinkedIn,” he says. Such profiles are used to ask relatives of the bank’s customers to deposit cash in exchange for the assets of their ‘deceased’ loved ones. “Our Head of HR has the most fake profiles of anybody I’ve ever met. The people behind these accounts are often sloppy with their imitations, but you’d be surprised how many people fall for their scams.”

Although the future of technology in banking is cloaked in mystery, Subramanian is certain of one thing, “As our volumes increase, so does the demand for more advanced technology,” he says. “Technology is not just about fancy things; the engine room of the organisation. It’s also about improving the smaller everyday processes that benefit our staff.”