GCCAAO in landmark deal with ICAEW 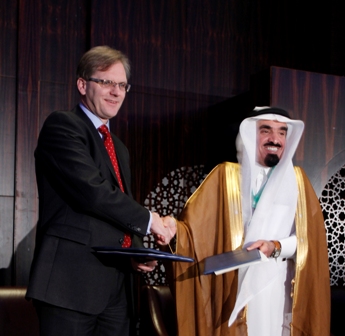 THE GULF Co-operation Council Accounting and Auditing Organisation (GCCAAO) and the Institute of Chartered Accountants in England and Wales (ICAEW) signed a landmark agreement to develop an Audit Quality Monitoring Programme for the GCC countries.

The agreement – the first pan-national project of its kind – was signed at a ceremony commencing the seventh GCCAAO Annual Forum by Mohammed Salih Al-Obailan, Chairman of GCCAAO and Vernon Soare, Executive Director, ICAEW, held at the Raffles Hotel, Dubai. Also present was the UAE Minister of Economy, His Excellency Sultan bin Saeed Al Mansouri.

Under the agreement, ICAEW will assist the GCCAAO in developing a world-class Audit Quality Monitoring Programme, and offer advice and support on the creation of a Gulf Monitoring Unit (GMU), to monitor the application of international standards on auditing (ISAs)  in each GCC country.

GCCAAO has asked ICAEW to draw on its internationally-recognised expertise and experience to advise on best practice concerning recruitment, regulation and creation of a monitoring framework.

Dr Abdulkarim Alzarouni, GCCAAO Vice-Chairman, said: “GCCAAO aims to co-ordinate and integrate the accounting and audit profession – across all GCC members – and this project seeks to promote the very highest professional and technical standards in audit. It is therefore a great pleasure to be working with ICAEW, one of the oldest and most-respected professional accountancy bodies in the world.”

“ICAEW is recognised internationally for its rigorous commitment to professionalism and ethics, and we are delighted they will be supporting our work to make audit in the GCC member countries a beacon of quality,” he added.

Vernon Soare said: “The Middle East is one of the most rapidly developing regions in the world economically, and stands at the centre of global trade and investment. Audit quality has a huge role to play in underpinning market confidence, through vigilance and transparency both within countries and across national borders. ICAEW applauds GCCAAO for all of its efforts to ensure the GCC countries have the highest possible audit quality – which we believe is critical to ensuring the region’s continued prosperity – and is proud to be supporting their vital work.”

Work between GCCAAO and ICAEW will occur in three phases, designing an effective framework and GMU, development and implementation, and on-going support.

Peter Beynon, Regional Director, ICAEW Middle East, said: “Ultimately, the ability to do business rests on the confidence placed in the accountancy profession, which is why ICAEW is committed to supporting the profession across the Middle East. We are delighted to continue to be part of this work in the region through working with GCCAAO.”